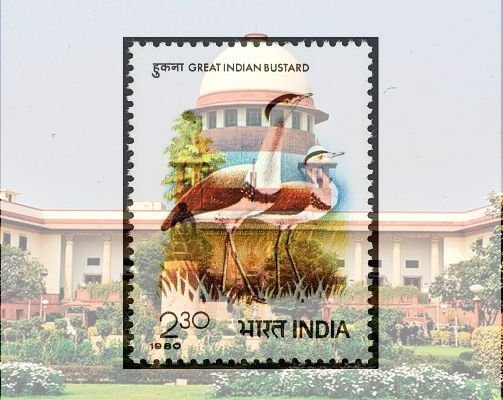 The great Indian bustard (GIB) which is only found in India and certain areas of Pakistan, is classified as “critically endangered” by the International Union for Conservation of Nature.

In a census in 2017-18 of the entire range of the Great Indian Bustard, it was estimated that there were about 125 birds left, with an error range of plus or minus 19.

Scientists attempting to conserve this species worry that the high voltage power lines which carry renewable energy from these parts of country could sound the death knell for this large bird.

Taking the above stated view into consideration the Supreme Court of India has directed the governments of Gujarat and Rajasthan to lay high voltage power lines underground in the habitats of the Great Indian Bustard to aid in its conservation efforts.

Power lines have long been a threat to the GIB and is also one of the prime reasons behind the steep decline in the Great Indian Bustard population in the past decade.

Research studies conducted by the Wildlife Institute of India have shown that nearly 18 GIBs die every year because of collision with power lines in the Thar region, Rajasthan.

Between 2013 and 2021, the population of GIBs has declined speedily in Kutch, the only place in Gujarat where GIBs survive today.

The two documented deaths of GIBs between 2014 and 2018 because of collision with overhead power lines proved beyond any doubt the severity of the threat power lines pose to the GIB.

Since 2018, there has been no trace of male GIBs in Kutch and this is a matter of grave concern.

A public interest litigation (PIL) for the protection of the bird was filed two years ago in the Supreme Court which asked for power lines in critical bustard habitats to be buried underground and for the installation of bird diverters on all power lines in semi-critical habitats.

On April 19, 2021, a three-judge bench comprising S.A. Bobde, Chief Justice of India, Justice A.S. Bopanna and Justice V. Ramasubramanian passed an order that will ensure that all power lines passing through the identified GIB habitats in Rajasthan and Gujarat go underground.

Until the lines are buried underground, the court ruled that bird-diverters should be installed on the power lines with immediate effect.