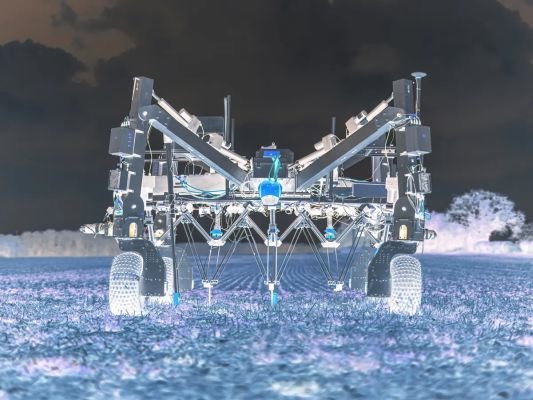 A UK startup called the Small Robot Company is about to change how farming is done. SRC uses two autonomous electric platforms — Tom and Dick — powered by Tesla batteries to gather detailed data about every field, including precisely where weeds are located.

Both are controlled by Wilma, an online platform that analyzes the data collected and recommends ways to maximize yields at the individual plant level.

The first robot is Tom, a 4-wheeled device that can scan up to 20 hectares (50 acres) of farmland a day, creating up to 6 terabytes of data in the process. That data includes information about each individual plant. It also plots the location of weeds that threaten the harvest.

Then there is Dick, the weed assassin which takes instructions from Wilma and sets out to find harmful weeds. Then it zaps them with 8,000 volts of electricity that boils them from the inside out.

The part that does the actual zapping was developed by RootWave, which is still fine tuning the technology so that Dick uses just enough power to kill the targeted weed in order to extend battery life.

The data collected by Tom is transmitted to Wilma, an AI platform that recognizes which weeds are in the field, analyzes the health of each individual plant, and creates an integrated farm management plan for the farmer and then Dick is put into action.

It is possible that government incentives and policy initiatives could help offset some of the high costs of the technologies since their should be a monetary rewards to not pollute the Earth with harmful chemicals that become less and less effective over time.