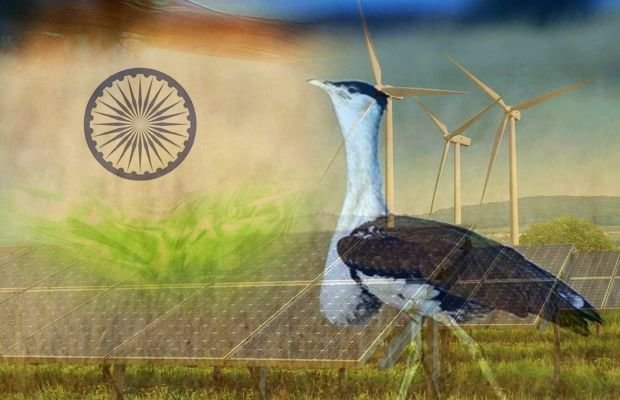 In an effort to save the great Indian bustard from flying into power lines, a Supreme Court order is asking for transmission lines in a large swathe of India’s western borders to go underground.

The April ruling was a result of a petition filed in 2019 by M.K. Ranjitsinh Jhala, a former bureaucrat turned wildlife activist.

The judges based their order on a report by the state-run Wildlife Institute of India, which said that “unless power line mortality is mitigated urgently, extinction of GIBs is certain.”

A Wildlife Institute of India (WII) survey covering 80 kilometers of power lines across the Thar desert region of the state found four bustard deaths during a single year due to high-transmission wires, including some connected to wind turbines. The study found that the Bustard died either because of the impact of the collision or electrocution.

Besides the transmission wires, a rapid conversion of grassland for farming or industrial projects and a slow birth rate — bustards lay one egg every year or two — have also led to their depleting numbers.

The problem, according to the energy companies, is that the court went well beyond the report’s prescription. While the state-run WII, advised burying cables in a region where most of the birds live, the court also called for action in potential habitats, expanding the protection area and the cost burden for the companies.

The companies say the directive could cost an estimated $4 billion in extra expenses, and jeopardize nearly 20 gigawatts of awarded solar and wind projects.

Taking lines underground can inflate project costs and power prices by nearly 20% and getting lenders to fund the additional expenditure, estimated at around 300 billion rupees ($4 billion), could be a challenge due to regulatory delays.

That means developers will have to put in their own equity money and then run around for years to get that reimbursed which under the current economic conditions they are not willing to do.