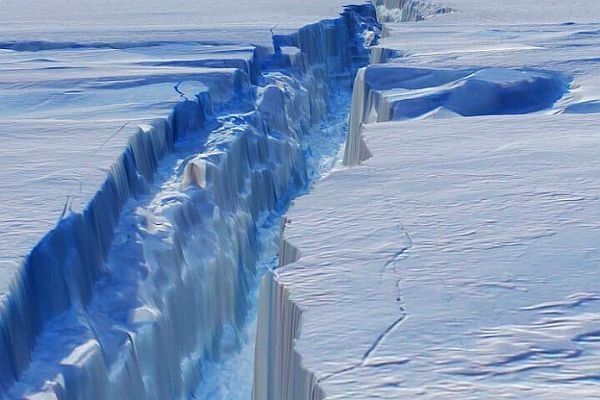 The ice shelf that holds Antarctica’s massive Pine Island Glacier from collapsing into the Southern Ocean is breaking up faster than before as climate change weakens the natural barriers to glacial melting, a new study finds.

The Pine Island Glacier holds about 160 trillion tons of ice — enough to raise global sea levels by more than 19 inches.

Scientists’ analysis of satellite images revealed the Pine Island glacier’s speed as it flows to the ocean increased 12% over just three years from late 2017 to 2020. Over that time, the glacier’s ice shelf lost one-fifth of its area, thereby reducing its ability to act as a proverbial cork holding the glacier in its on-land ‘bottle.’

The accelerated calving appears to be due to large rifts that form well upstream of the calving front, which have been attributed to enhanced rifting and loss of ice along the northern shear margin.

Another study shows the current pace of warming could trigger a sudden acceleration of ice melting in about 40 years, with catastrophic impacts as ice melt is responsible for about half of sea level rise.

However, predicting ice sheet melt is already extraordinarily complex, but the scientists emphasized the potential for even less predictable, and worse, impacts if global temperatures are left to continue rising. When we jump to a world that reaches 3 degrees by 2100, the way ice behaves] really starts to change.