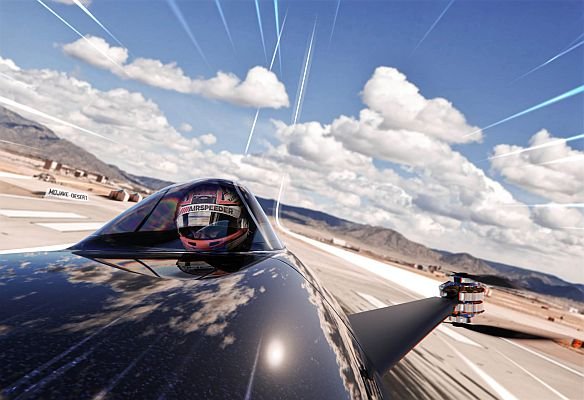 Flying racing cars use to be the stuff of science fiction dreams and futuristic video games but now Airspeeder is making these wondrous fever dreams a reality with its flying racing car and racing series.

The brainchild of entrepreneur Matthew Pearson, Airspeeder is the motorsports series set up to fly the Alauda-manufactured flying cars. Airspeeder and Alauda are two separate companies set up by Pearson.

Alauda is the production wing that designs and builds the vehicles, whereas Airspeeder is the company that will run the races and organize the series.

The eVTOL that will be used in the races is the Alauda Mk3, and it’s this vehicle that recently undertook its first test flight in a desert in South Australia.

If you’re thinking that the Mk3 will be some kind of pedestrian-paced drone, you’re wrong.

As with all electric aviation vehicles, battery life is a challenge, especially with a more high performance eVTOL like the Mk3.

The batteries are estimated to have 15 minutes of charge available before needing to be swapped. To get around this issue, the Mk3 is fitted with a battery that can be replaced in around 20 seconds.

At the moment the flights are unmanned, with the vehicles being remotely piloted. Airspeeder has drawn on people from aviation, e-sports, and motorsports backgrounds to be in control of the Mk3s.

Taking place in the air, it is of course impossible to have a traditionally visible race track. Instead, the pilots will see the racecourse through the use of augmented reality sky-tracks.

Audiences will be able to see the same augmented reality track, and can watch the races via digital streams. There are plans to have manned races taking place by 2022.

The “Doomsday Glacier” Is Melting At An Unprecedented Rate…