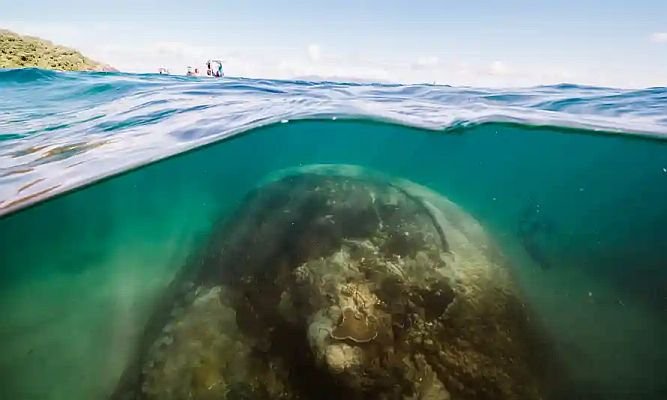 A team of scientists was shocked when they accidentally stumbled upon an “exceptionally large” mass of coral, Porites sp. at Goolboodi (Orpheus Island) in the Great Barrier Reef that they believe to be more than 400 years old.

The new coral is likely the widest of its type, according to the research published in the Nature journal last week. And, in a surprising twist, the bus-sized coral was shockingly healthy compared to other regions of the Great Barrier Reef that have suffered in the warming, increasingly-acidic water.

The researchers were surprised to learn that such a huge coral had gone undiscovered for so long, but ultimately concluded it was probably because they found it in a region of the Great Barrier Reef that’s particularly remote and well-protected so went unnoticed from the eyes of tourists and other researchers.

In order to survive for its centuries-spanning life, the giant coral must have endured nearly 100 bleaching events and 80 major cyclones on top of generally worsening oceanic conditions, the researchers conclude.

While one large, healthy coral doesn’t mean that the entire reef is about to bounce back, that’s reassuring news for the overall ecological health of the region — perhaps there are other survivors, relatively unscathed by climate change, hiding out there as well.

Or maybe this hardy sample can offer clues for how we can save the rest.