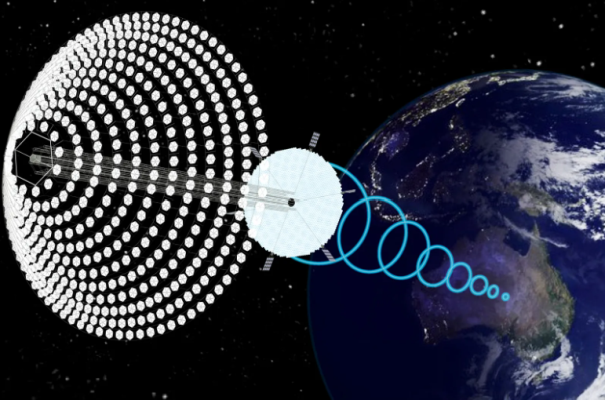 Several countries, including the United States, China, Korea, Japan, and the United Kingdom, are seriously considering beaming solar power down to Earth from space, which was previously dismissed as technically and financially unfeasible. The European Space Agency is also a participant.

According to the ESA’s website, “by approaching theoretical transmission efficiencies via electromagnetic waves (50–60 percent),… we could produce around 400 W of electricity per square meter on Earth receivers, which is roughly two to three times the amount we could receive from the same area of terrestrial PV panels.”

One of the most important advantages of space-based solar power (SBSP) is that it is available 24 hours a day, which means — in theory — there would be no need for large battery storage installations and the energy beamed down from above would be continuous all day every day.

The levelized cost of energy from space-based solar power would be cheaper than most conventional thermal production sources and just slightly more than solar and wind power, according to a research titled ‘Space Based Solar Power—De-Risking the Pathway to Net Zero.’

China plans to launch a satellite that will serve as a test-bed for SBSP by 2028, while the US Air Force plans to launch its own “power-beaming” test mission by 2024, which it views as a way to power future distant battle sites.

If you’re ready to reject this as simply another wild and crazy notion with little chance of success, don’t. Keep in mind that the cost of solar panels has been reduced by 99 percent since their introduction. Nobody thought the early LED lights would be practical since they were so dim.