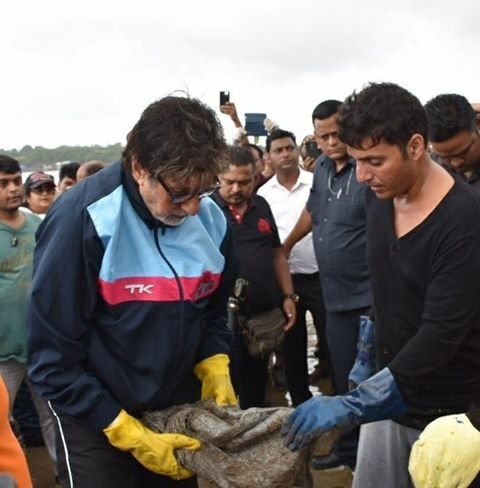 Megastar Amitabh Bachchan is the latest celebrity to join the list of citizen volunteers supporting the clean up of Mumbai’s Versova Beach.

The fight to save Mumbai’s many beaches received a major boost recently when megastar Amitabh Bachchan decided to lend his significant support to this noble cause.

In a move that caught several people unawares, the actor took time out from the shooting of his film Thugs of Hindostan and television game show KBC, to drop in at Versova Beach recently to lend his support to the ongoing cleanliness drive as part of the Save Versova Beach campaign.

Bachchan joined the many volunteers who regularly show up on this once filthy beach, in full protective gear that included rubber gloves and gum boots and was seen picking up garbage much to the amusement of the crowd that had quickly gathered there.

Later tweeting on his official Twitter handle, the actor posted the picture with a caption: On Versova Beach to meet Afroz Shah, who is working a miracle in its clean up! Truly inspiring!!

The rapidly deteriorating conditions of many of Mumbai’s beaches as now become a matter of concern for all concerned.

In its five-month study initiated from November 2015 to March 2016, NGO Reef Watch had surveyed beaches at Versova, Juhu, Dadar, Girgaum Chowpatty, Uttan, Gorai, Aksa and Madh. The report found that Juhu, Versova and Aksa were the dirtiest beaches.

A brainchild of Mumbai-based lawyer Afroz Shah, this massive drive to clean the city’s Versova Beach has reportedly rid its sands of a whopping 5.5mn kilograms of waste since it began in October 2015, thanks largely to its growing band of citizen volunteers.

What started as the efforts of a lone crusader has today grown into a public participation movement and drawn praise from the United Nations and even Prime Minister Narendra Modi himself.

The PM had made special mention of Shah’s drive in his popular monthly radio programme – Mann ki Baat – in May this year.

“I feel proud to make a mention of something…a man can start a massive people’s movement. Recently you must have heard about Versova Beach, once considered very dirty, it has now become clean and beautiful. This has not happened overnight, locals have toiled for over 80 weeks,” Modi had said in his address, acknowledging the efforts and dedication of Shah and Versova Residents Volunteers (VRV), the group spearheading the movement.

“I congratulate Mr. Afroz Shah and this movement…it is inspirational how he connected people,” the PM had added. In his response to this unexpected acknowledgement from the PM, Shah said that Modi’s opinions were a source of great encouragement and that the drive was an apt demonstration of the “incredible power of community-based volunteer work.”

Shah’s efforts have also been recognized by the United Nations, which presented him with the prestigious Champion of the Earth award last year and also initiated an international Clean Seas campaign in Indonesia, inspired by Shah’s efforts and the movement to save Versova Beach.