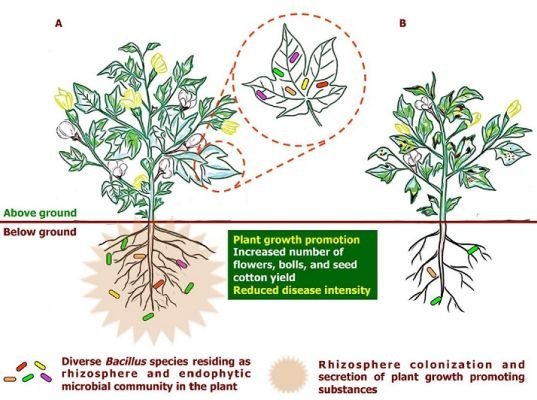 The formulation, prepared in buttermilk, was tested against the plant virus and found effective. The use of buttermilk for its antimicrobial activity in humans and plants has been a traditional practice. Many milk proteins are known to have shown antiviral activity, by inhibiting reverse transcriptase enzyme of viruses. In the new study too, buttermilk base alone could reduce virus concentration but was more effective when used in combination with Bacillus formulations.

TSV causes cotton necrosis disease and is a major problem for cotton farmers. The virus gets transmitted to cotton plants through insect vector, thrips. TSV produces multifarious symptoms. Farmers are generally unaware of these symptoms and end up applying insecticides indiscriminately to control the vector. Scientists have, therefore, been looking for an eco-friendly management method.

A few studies have reported the possibility of antiviral activity of bacteria against cotton leaf curl, cucumber mosaic virus and tobacco mosaic virus. Taking the cue, researchers collected rhizospheric and endophytic bacteria from both healthy as well as infected cotton plants. They cultured the bacteria and assessed their antiviral efficiency. They found that a rhizobacterium called Bacillus amyloliquefaciens was showing promising results.

Experiments were conducted during 2015 and 2016 in two different locations in Tamil Nadu to assess the efficacy of Bacillus species and phyto-antiviral principles against TSV infecting cotton. A High yielding hybrid, RCH659 was selected for the study.

Buttermilk was used as a carrier base for application of bacterial inoculation. It was found to effectively colonize rhizosphere and phylloplane of cotton plant and produce anti-microbial peptides and fatty acids, which curbed the virus.

“The formulations of plant growth promoting rhizobacteria suspended in buttermilk not only reduced the disease incidence but also promoted plant growth and yield. More studies are needed to develop formulation into a user-friendly product. There is also a need to test it in other cotton growing areas in the country,” said Dr S. Vinodkumar, a member of the research team.