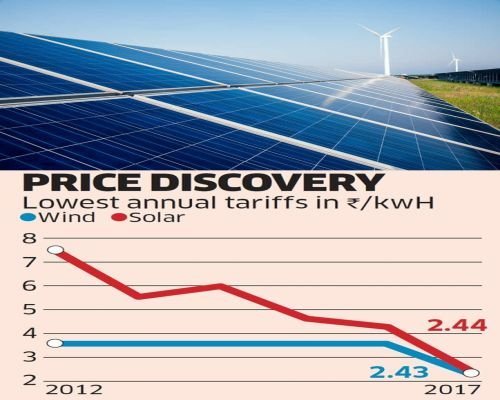 As on date, the bids for setting up of wind power projects of aggregate 8.4 GW capacity have been finalized through the Solar Energy Corporation of India (SECI) and the National Thermal Power Corporation (NTPC).

Bids of 500 MW each have been finalized by the states of Tamil Nadu, Gujarat and Maharashtra.

The government has set a target of installing 60 GW of wind power capacity by 2022, against which 35 GW capacity has already been installed.

However, generation based incentive (GBI) to the wind projects were ended for projects commissioned after March 31, 2017.

Since the advent of auctions, wind power tariffs have taken a deep dive. As of now, the lowest ever wind tariff is even lower than the lowest ever solar tariff in India.

The lowest ever wind bid in India is ₹2.43/kWh that was quoted in the 500 MW Gujarat Urja Vikas Nigam Ltd. (GUVNL) auction. While, the lowest solar tariff in India so far is  ₹2.44/kWh.

Topics: NTPC reverse auction SECI solar power tariff Wind power
Previous Post IIT (Mandi) Is Developing A ‘One-Stop-App’ For All Your Solar Installation FAQs
Next Post A Biosensor On Your Phone That Can Sniff Bacteria