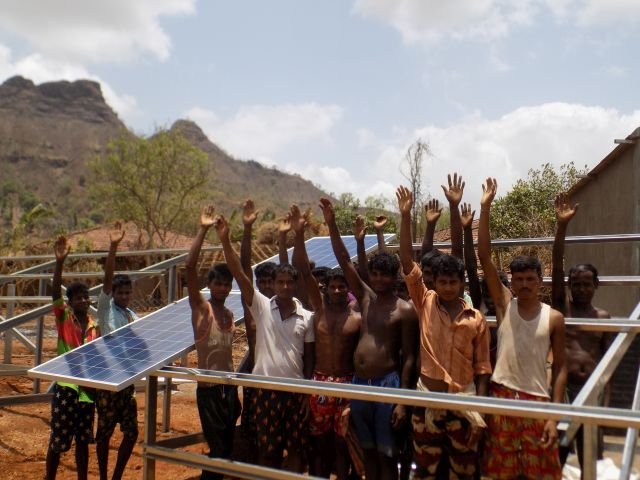 As per the Indian government’s rural electrification policy, a village is deemed ‘electrified’ if basic infrastructure such as distribution transformer and distribution lines has been set up in the inhabited locality. Nowhere does the definition talks about actual electricity connection or its supply to a village household. So statistically India is a developed country.

People who complain about government inability to supply power need to realize that it is near impossible to supply grid power to remote villages. The solutions lies in micro power grids managed by local enterprises. If a village produces its own power, distributes it to households and collects revenues to be sustainable, can there be a better model for rural electrification thus came the concept of Gram Orja.

Gram Oorja is a strong promoter of renewable energy for rural communities.

Sustainability of the projects and

Captive use of energy by the institution or community.

Gram Oorja convinced Bosch Solar Energy AG to fund a pilot project in Darewadi a picturesque hamlet in the Sahydri Mountains in Maharashtra, to establish a business model that works efficiently and is sustainable as well. Shakti Foundation was the nodal NGO that provided consultation and guidance.

A decentralized solar power plant with a capacity of 9.4 kilowatts was set up in 2012. A biogas unit was also set up as backup power provider when sunlight was not available. Further, a central battery bank and an inverter manages power fluctuations, leading to better load management. Maintenance of this system is done centrally, so that it is cost effective. Apart from electrifying households, the microgrid also provides power to a flour grinding mill and two water pumps. These are managed by the village trust and their revenue is deposited in a bank account as a corpus fund.

Each of these micro-grid projects cost around INR2.5-3 million, which is recovered from power bill revenues over a period of 5-7 years.