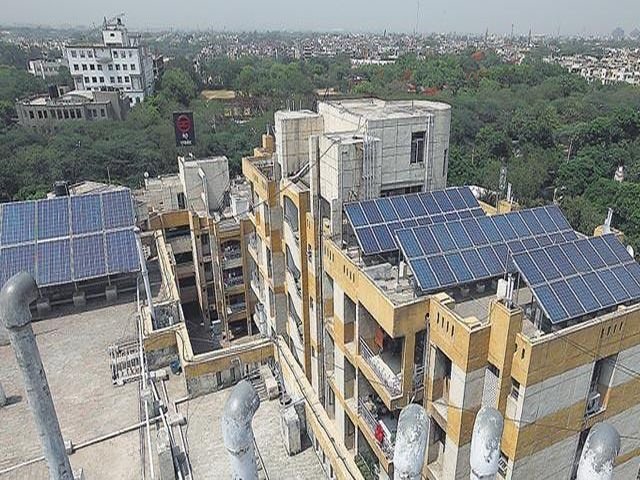 Under the solar mission, India is supposed to have put in 5,000 megawatt of solar plants on the roofs of houses, apartments, offices, factories and other buildings by March 2017.

Instead, the actual achievement is just 704 megawatt as of July end which is only 14% of the target. The highest contributor is Maharashtra, home to 123 mw, followed by Tamil Nadu, which has 98 mw.

Out of the 704 mw, only 33 mw has been installed on residential rooftops. As a result, out of the Rs 5,000 cr budgeted for subsidy support for residential installations, the total amount that has been claimed so far is just 73.58 cr.

To spur investment on the solar farm side, the government has set up special vehicle under the supervision of NTPC Ltd. This part of the progam has been largely successful so far. Against a target of adding 12,700 mw of peak power by March 2017, India was able to add 12,290 MW by the deadline. In the current financial year, another 10,000 megawatt will be added on the solar farm side.

Realizing that not much action was happening on the rooftop front, the Center in 2015 announced that it will provide 30% of cost of setting up rooftop solar plants in ‘general category’ states and 70% in special category or very underdeveloped states.

However, the plan — that can only be availed for residential buildings — remains unknown to most people. Under the plan, a person can get 30% of the benchmark cost of his rooftop solar plant reimbursed from the government.

The benchmark cost approved by the government at present is Rs 75 per watt. The scheme envisages a grid-connected installation, and not a standalone installation. It is not clear whether the subsidy support can be availed for standalone systems.

Under the grid-connected rooftop system specified by the government in project documents, the installation will require only the panels, an inverter and a two-way electricity meter. Unlike standalone systems, it will not require a battery, which can lower the cost by about Rs 10,000.

The government also allows special companies, known as Renewable Energy Service Company (RESCO), to lease rooftops belonging to private individuals to set up rooftop installations. Given that all rooftop plants atop residential buildings are eligible for subsidy support, it is likely that the RESCO will be provided with subsidy support as well.

However, India has not seen the emergence of such companies on a significant scale yet. Part of the reason for the poor progress on the rooftop side has been a lack of awareness, and relatively lower levels of government support.