Flights to Fly on Biofuels 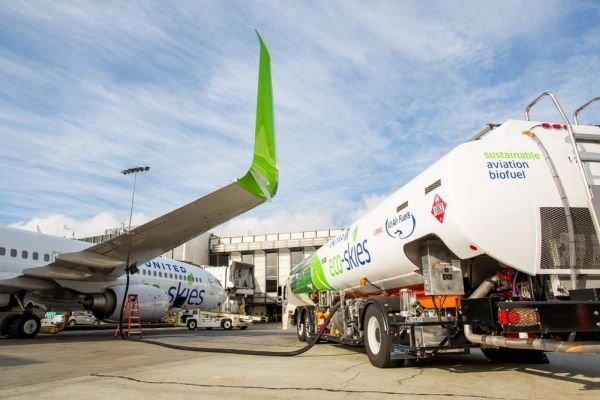 If the aviation sector were a country, it would be the eighth-largest emitter of greenhouse gases in the world — using planes and helicopters to move people and cargo around the world produces around two percent of the world’s planet warming gases. In 2010, carbon dioxide (CO­2) emissions, the  primary contributor of human-caused climate change, from international aviation amounted to 448 megatonnes (Mt). The International Civil Aviation Organisation has forecasted that CO2 emissions from the aviation sector will increase to the range of 682 Mt to 755 Mt by 2020, and could even be as high as 2,700 Mt by 2050, a six-fold increase from 2010 levels, if nothing is done about it.

So what can be done? What’s the environmentally responsible solution for aviation, and how can emissions be reduced, short of removing planes from the skies?

Technology development has meant that plane designs are improving and engines are getting more efficient. There’s a host of ongoing efficiency changes in all aspects of air travel (improved fuel efficiency in new aircraft, aircraft modifications, airport restructuring, and optimised navigational systems) that are helping to reduce CO2 emissions by about 1.5% annually. But because aircraft have a long life span and are very expensive, airlines typically want to use them as long as possible before replacing them, so rolling out these changes and meeting 2020 and 2050 emission reduction goals requires more drastic changes.

Biojet fuels exists today, but current production is limited, comprising less than than 0.1% of global total jet fuel consumption. Today’s biojet fuels, ‘conventional biojet’, are derived from crops, and ‘advanced bio-jet’ — advanced liquid biofuels based on lignocellulosic biomass or algal feedstocks — will open the market to a larger variety of feedstock options and economic opportunities in the supply chain. The aviation sector is already anticipating this transition and projects are underway to develop the next generation of advanced bio-jet.

While biojet is already in use, it only makes up a fraction of a plane’s fuel and only on a tiny percentage of flights. The high cost of production is one of the main barriers to stopping greater biojet adoption, as fuel can account for as much as 30% of an airline’s total operating expense. Bridging the price gap between biojet and conventional fossil-based jet fuels can be achieved with the support of specific policies

The Netherlands and the U.S. have implemented policies that promote biojet production and use, and Indonesia has announced a bio-jet mandate to grow biojet demand but runs a risk if its supply can’t match it