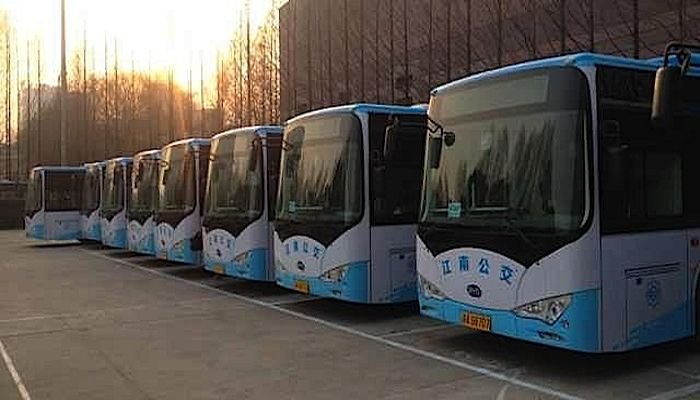 Shenzhen has been working toward this goal for a while. It already has 14,000 electric buses on the street, with only has a few hundred diesel-powered buses left to replace. They will be decommissioned over the last two months of the year. BYD is in charge of providing 80% of the electric buses for the city. It is also heavily vested in electric vehicles (EV), leads the world-leading Chinese EV market, and has introduced its electric bus all over the world, including in Long Beach, California, where we were privileged enough to take its maiden ride. BYD started the Shenzhen pilot test in 2011. In six years, the giant city (population 11.9 million) managed to implement a complete switch.

China has to clean up its air pollution situation. The country is the largest emitter of greenhouse gases. Vehicles sold in China emitted 44.7 million tonnes of pollutants in 2016, according to the World Health Organization. The Ministry of Environmental Protection says going electric is the only feasible and practical solution.

BYD, which stands for “build your dreams,” is indeed building its dream — after all, it produces 80% of this giant city’s electric buses. The company is also headquartered in the city and has been producing batteries since 1995. It started manufacturing “new energy vehicles” (NEVs) in 2003. Beijing considers hybrids, plug-in hybrids (PHEV), and pure EVs as NEVs.

BYD’s first electric bus started in 2011 and used a lot of space for its batteries, encumbering on its passenger capacity. But battery energy density and the overall technology has matured enough to allow electric buses to carry the load of a conventional diesel bus while making them more affordable to operate over their lifespan.