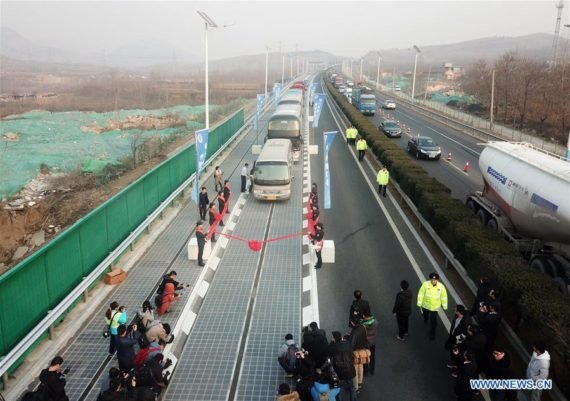 Jinan, the capitol of Shandong province south of Beijing witnessed the opening of China’s first 1-kilometer long solar road. The two-lane road covers 5,875 square meters and can generate up to 1 million kilowatt-hours of power annually — enough to power 800 Chinese homes.

The electricity will be used to run street lights, billboards, surveillance cameras, and toll collection plazas. It will also be used to heat the road surface to keep it clear of snow. Any excess will be fed back into the local utility grid.

The surface of the road is made of transparent concrete which can withstand 10 times more pressure than regular concrete and beneath the concrete are solar panels that convert sunlight to electricity. Under the solar panels is an insulating layer designed to protect them from excessive heat or cold.

In crowded cities (China has more than 120 cities with a population of one million of more), there is not always room for solar panels, so finding alternative locations such as roads and bodies of water is becoming more common and this is supposed to have costed much less than its counterpart in France.