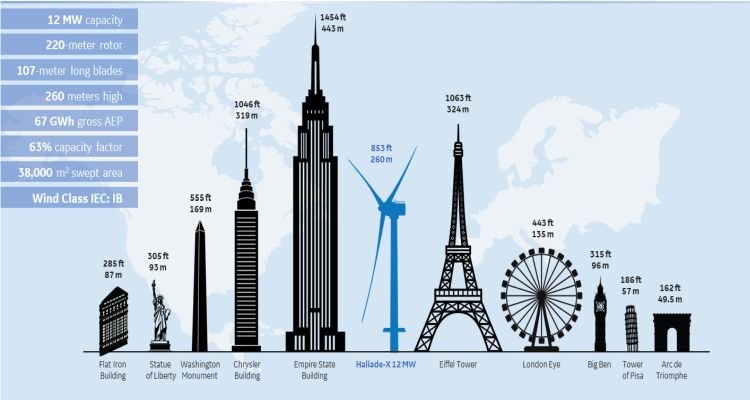 GE Renewable Resources said it’ll spend as much as $400 million over the next few years to build an offshore wind turbine almost 100 meters taller than the Washington Monument.

The new turbine, dubbed Haliade-X, will measure 260 meters (853 feet) tall, the company said. The blades, manufactured by LM Wind Power, will be longer than a soccer field.

One 12-megawatt turbine will generate as much as 67 gigawatt hours a year, which is enough to power 5,000 households, GE said. Bigger turbines need fewer foundations and less complex grid connections than smaller units. That means a wind farm’s layout can be made more efficient, and fewer machines means less maintenance.

The costs of building and producing offshore wind farms have fallen dramatically in recent years making subsidy-free projects a reality. In 2017, the German and Dutch electricity regulators approved bids to build what will be the first offshore wind farms that depend entirely on market prices instead of government support and subsidy.

Foundation manufacturers and installation vessel suppliers will need to adapt to the shift toward bigger turbines, while investors must learn to finance gigawatt-scale projects operating machines that have never been used

GE said it’ll supply the first nacelle for a demonstration in 2019 and ship the first turbines in 2021.