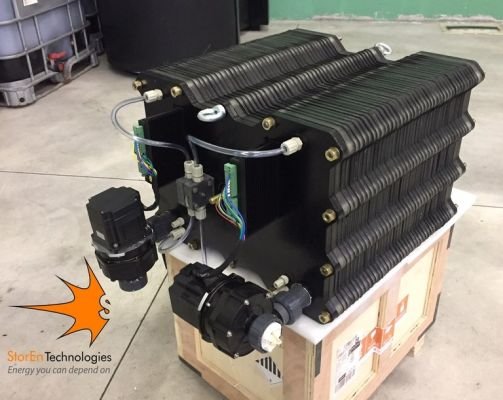 Although history shows redox fuel cell concepts emerged around 1955, NASA brought the idea to life in the ’70s during the energy crisis of that time. NASA continued development but struggled to find a solution that would deliver efficiency in fluctuating temperatures.

Lithium-ion batteries were developed in the ‘80s to meet the needs for more compact, higher capacity energy storage and are the most popular device today.

StorEn battery’s increased power density enables StorEn to reduce the size of the battery stack. With smaller plates able to deliver performance at parity with larger sizes, less material (such as membrane material) is required, lowering material cost by as much as 50%. The battery also has a better fluid dynamic, facilitating effective operation at lower pressure, which increases round-trip efficiency.

The result is an initial battery price of $400 per kWh of energy storage capacity, but that doesn’t capture the full story. The relatively long 25-year battery lifespan, combined with full rechargeability and reusability, results in a cost of $0.02/cycle, which is competitive with the best lithium-based batteries.