Three plants go to NTPC, BSPGC will look after Solar 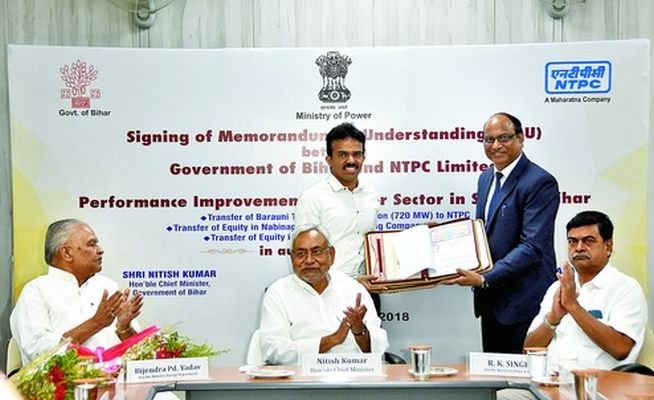 The Bihar government and the NTPC on Tuesday signed a memorandum of understanding for handing over three power plants to the national power company on a 30-year lease.

The NTPC will set up its own teams to run the three plants. “Those posted at the three power plants would now be deputed in transmission and distribution companies.”

The Barauni Thermal Power plan, a fully owned subsidiary of Bihar State Power Generation Company (BSPGC), has two units of 110 MW each and under two more units of 250 MW each are to be set up there. Now, the NTPC will do the expansion work. The second plant, the 610MW Kanti Bijli Utpadan Nigam Limited in Muzaffarpur district, is a joint venture between the NTPC and the Bihar power generation company. The third plant, in Nabinagar, Aurangabad, is also a similar joint venture and has three production units of 660 MW each

Bihar State Power Generation Company Limited in the meantime will look after work related to solar and hydro-electric power generation.