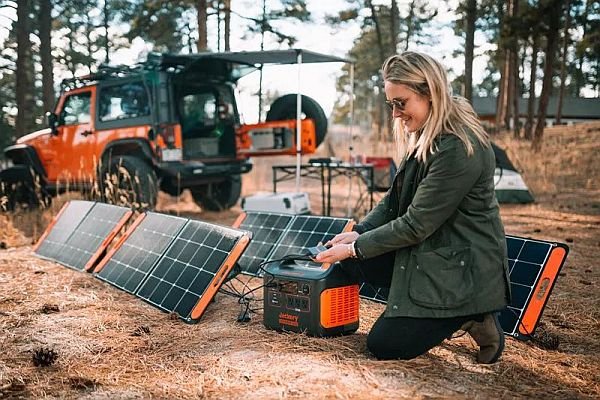 The new unit can support sustained output loads of an impressive 1,800 watts with peaks of up to 3,600 watts.

At those levels, this Jackery unit can support running the average household refrigerator for a full day as home units typically consume between 1,000 and 2,000 watts of power at startup and from 1-2kWh per day.

That’s perfect as a backup power supply for unplanned outages, as are increasingly popping up across California as utilities increasingly lean on the newly implemented Public Safety Power Shutoffs as a means of protecting against wildfires or the recent Texas weather outrage.

Beyond simply powering the essentials, the Jackery Solar Generator 1500 opens up a range of new possibilities for recreational use. With the four fold out solar panels plugged in to recharge it, this kit could readily replace the generator in a recreational vehicle to power onboard devices like TVs, lights, microwaves, blenders and more.

The Solarpeak Technology® (an upgraded MPPT solar regulator). Its algorithm can identify, monitor, and maximize the greatest available input in concurrency, extracting the most sizable solar energy under all conditions.

It adds up 30% more solar recharging efficiency, which shorten the charging time to 4 Hours (0-80%) under straight full sun.