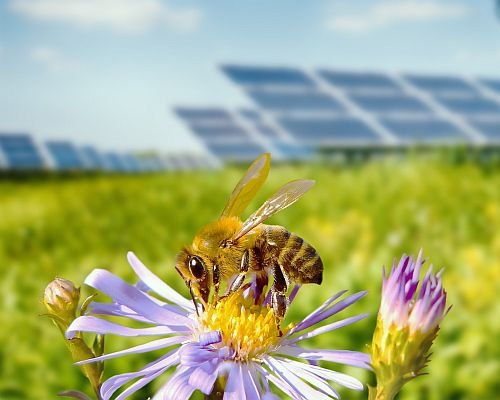 A solar power company, Navisun, has just added a couple of solar projects to a special new “pollinator-friendly” solar initiative it has launched in Massachusetts.

Navisun worked closely with expert ecologists to initiate its new pollinator program. Navisun’s program was established in large part because environmental stressors, such as land development and pesticides, have caused the number of bee colonies per hectare to decline by 90% since 1962 among U.S. crops that require bee pollination.

This is a critical issue, as insects such as bees and butterflies are responsible for pollinating nearly 75% of all crops consumed by humans.

As Navisun continues to expand its project portfolio, the growth of its pollinator-friendly expertise will enable it to implement pollinator habitats in all applicable future projects, which will in turn directly support farmers, food production and the environment.

This leadership has awarded the solar company recognition beyond the power sector. It received “pollinator-friendly certificates” from the University of Massachusetts (UMass) Amherst Clean Energy Extension for their solar projects in Orange and Sheffield, Massachusetts.

That meant that they also qualified for “adder” designation under the Massachusetts SMART Program.

This pollinator-friendliness should be adopted by other developers around the world so as to add another Eco-friendly benefit to the solar farms.

Scientist – Geoengineering Should Be Made Illegal