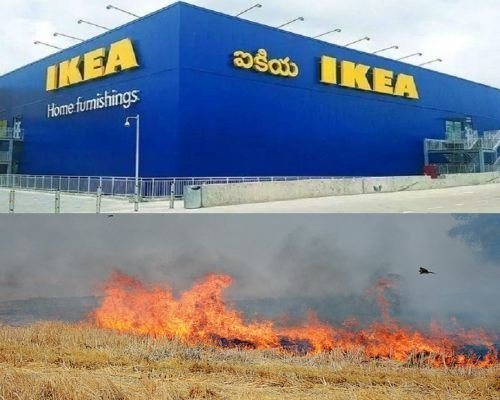 According to estimates from the NITI Aayog, roughly 39 million tonnes of paddy straw is burnt annually in Haryana, Rajasthan, Uttar Pradesh and Punjab, adding to air pollution.

Stubble burning, a process followed by farmers in North India every year around winter as they prepare the field for the next crop and is blamed for the toxic smog that blankets Delhi.

IKEA, the world’s largest furniture retailer, plans to work with farmers, companies and state governments in India to turn rice straw into a raw material that can be used to manufacture new products.

IKEA’s initiative could work as an environment-friendly solution to straw and stubble burning. Turning the crop residue into raw material would also provide an extra income to farmers.

The Swedish company said the first product prototypes based on rice straw would be ready by the end of 2018 and IKEA India would start selling the products in 2019-2020.

The company also plans to launch air-purifying curtains and air purifiers in the next two years, for which work is ongoing.

Starting off in India, IKEA wants to turn rice straw which contributes heavily to air pollution into a new renewable material source for IKEA products. The ambition is to create a model for how to reduce air pollution that could be replicated in other mega cities.