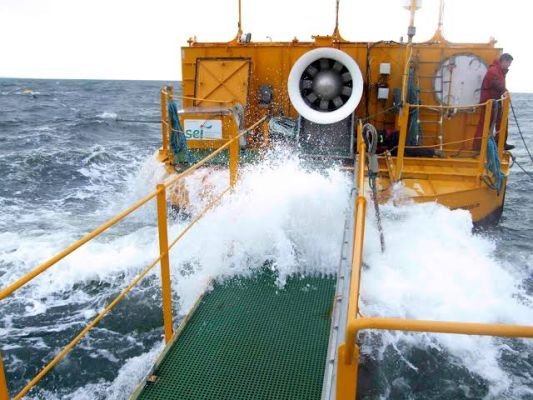 Renewable energy comes in many forms, with sunlight, wind, and flowing water being the most common. There is also an enormous amount of untapped energy in ocean waves.

Ocean Energy has spent the past 10 years designing systems to capture the energy contained in ocean waves and converting it into electricity.

Its latest creation, called OE35, is the culmination of everything the company has learned in that time.

Weighing 826 tons, it is essentially a sealed chamber that floats on the surface of the ocean. As waves pass beneath it, they force air upward in the chamber. That moving column of air spins a turbine that generates electricity.

The beauty of the Ocean Energy technology is that it also harnesses the energy of the air column as it flows back into the chamber as a wave passes on.

Think of it as a compound steam engine that makes power as its piston moves in both directions.

Ocean Energy OE 35 has been engineered specifically to withstand the constant assault of wind, waves, and salt that will batter it every hour of every day.

The first prototype has left the west coast and it being towed across the Pacific to the US Navy Wave Energy Test Site in Kanehoe Bay, Hawaii where it will be evaluated for 12 months.

If it passes its sea trials, the company plans to build five more units and deploy them in the Oregon Wave Energy Test Site near Newport, Oregon.

Each OE 35 unit will be capable of generating enough electricity to power a small town. Unlike offshore wind turbines, it is extremely simple and robust, making it able to survive years at sea with little to no maintenance.