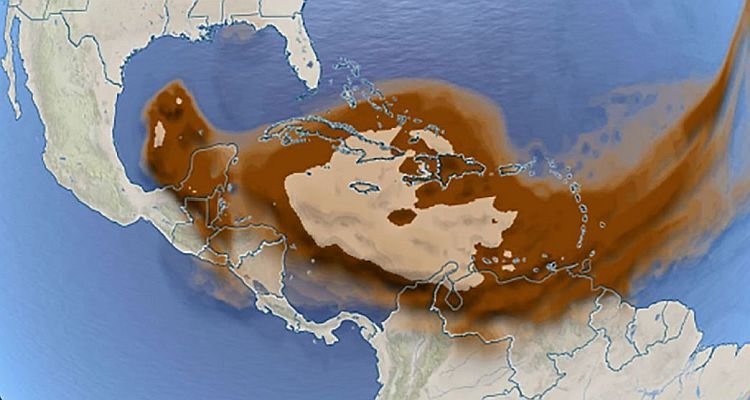 After wreaking havoc on air quality readings in the Caribbean, dust from the Sahara Desert just arrived at the US gulf coast, forming what experts referred to as a “Godzilla dust cloud.”

It’s so large, it can be easily seen and tracked from space and experts say such a thing hasn’t been seen in half a century. Air quality across most of the region fell to record “hazardous” levels that experts have warned people to stay indoors and use air filters if they have one.

Many health specialists were concerned about those battling respiratory symptoms tied to COVID-19.

Pablo Méndez Lázaro, an environmental health specialist, who is working with NASA to develop an alert system for the arrival of Sahara dust, said the concentration was so high in recent days that it could even have adverse effects on healthy people.

“The ongoing Saharan #dust outbreak across the tropical Atlantic is *by far* the most extreme” since records of global dust began in 2002, atmospheric scientist Michael Lowry tweeted on Wednesday.

Dust from the Sahara makes its way across the Atlantic on a yearly basis, but rarely on this scale. The phenomenon is called the “Saharan Air Layer,” and it “typically ramps up in mid-June and peaks from late June to mid-August,” according to a recent writeup by the National Oceanic and Atmospheric Administration.

“This layer can travel and impact locations thousands of miles away from its African origins,” the NOAA wrote. It also “plays an important ecological role, such as fertilizing soils in the Amazon and building beaches in the Caribbean.”