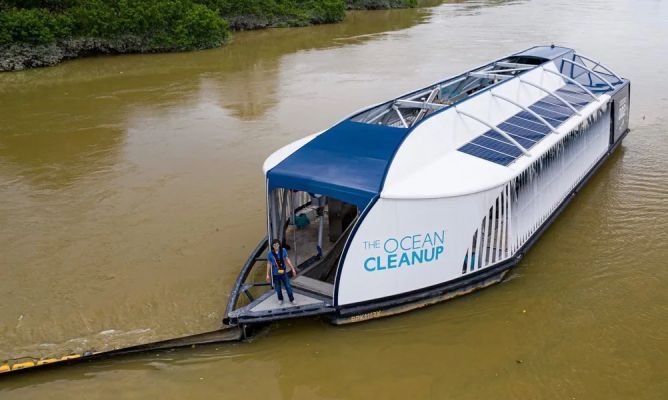 The Ocean Cleanup, the Dutch non-profit organization developing advanced technologies to rid the world’s oceans of plastic, was recently awarded $1M USD by the Benioff Ocean Initiative to stop plastic from reaching the ocean at Sandy Gully in the heart of Kingston Harbour, Jamaica.

The award to The Ocean Cleanup is one of nine granted by the Benioff Ocean Initiative, in a partnership with The Coca-Cola Foundation.

To rid the world’s oceans of plastic, they plan to remove legacy waste and prevent plastic from entering the ocean. Because rivers are the primary source of ocean plastic, this is where one needs to apply a solution.

For the above, the Ocean Cleanup has designed, an Interceptor, the world’s first scalable solution for preventing river debris from entering the ocean – meaning it can be placed in the majority of the world’s most polluted rivers.

The Interceptor, much like our ocean cleanup technology, relies on natural forces (river currents) to extract debris flowing through rivers and ensure that it does not make its way to the ocean.

It is 100% solar-powered, extracts plastic autonomously, and is capable of operating in the majority of the world’s most polluting rivers.

Alongside the research into the most polluting rivers, they have also conducted research on where to best place Interceptors in the rivers.

The optimal setup is determined on a case-by-case basis, based on flow-velocity, the width of the river, presence of a plastic “hotline” ( A distinguishable, concentrated path of debris as it flows through the river), traffic, proximity to a delta, etc.

The project is part of The Ocean Cleanup’s ambition to stop plastic pollution at the source by tackling the 1000 heaviest-contributing rivers in the world.

The Ocean Cleanup currently has Interceptors online in Jakarta (Indonesia) and Klang (Malaysia), and will soon start installation in Santo Domingo (Dominican Republic).

Prior to Jamaica, Interceptor scale-up projects were announced for Vietnam, Thailand, and Los Angeles County (USA).

As part of The Ocean Cleanup’s research to map the problem, it was established that 1,000 of the world’s 100,000 rivers (1%) are responsible for roughly 80 percent of the garbage entering the oceans.