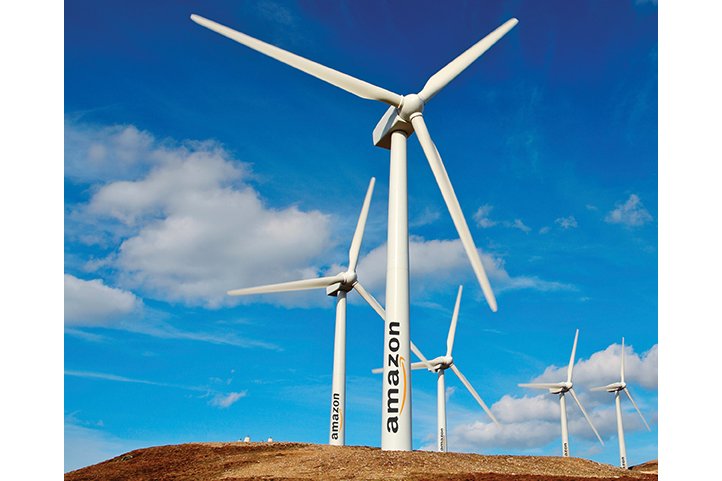 Amazon’s ever-expanding global network of fulfillment and data centers, has a growing demand for energy and an equal appetite for and commitment to renewable energy. In fact, Amazon Web Services (AWS), the company’s cloud computing business, has a long-term commitment to achieve 100 percent renewable energy usage for its global infrastructure footprint.

The company has become a big player in the renewable energy industry, recently announcing plans for its largest wind farm yet in a blustery corner of west Texas. When completed in late 2017, Amazon Wind Farm Texas will have the capacity to generate approximately 1 million megawatt-hours of electricity annually — enough to power almost 90,000 U.S. homes. The wind farm, built by Lincoln Clean Energy, includes a fleet of GE wind turbines, and of the energy generated, 90 percent of the output will be sold to Amazon’s fulfillment arm.

Wind power is not only good for the climate but also for the wallet. The cost of wind power is about one-third of what it was six years ago. The opportunity for corporations to leverage the cost-competitive nature of renewable energy is growing. In 2015, AWS announced the construction of Amazon Solar Farm US East, Amazon Wind Farm Fowler Ridge, Amazon Wind Farm US Central and Amazon Wind Farm US East. In 2016, it announced five additional solar farms and one more wind farm, bringing the total number of such AWS projects to 10. With the addition of Amazon Wind Farm Texas, Amazon is poised to generate almost 3.6 million megawatt-hours of renewable energy by year-end 2017. Scurry County, Texas, was selected as the site for the Amazon Wind Farm Texas because of its plentiful wind and affordable production and transmission costs.