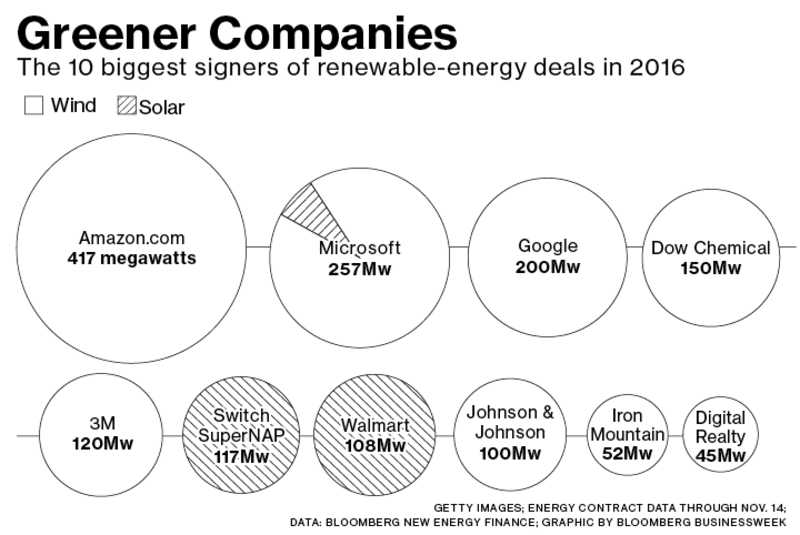 Last year nearly 40 per cent of US wind contracts were signed by big corporations, along with university and military customers.

These users also accounted for an unprecedented 10% of the market for large-scale solar projects in 2016. Just two years earlier there were none. The big reason: lower energy bills.

Costs for solar and the wind are plunging thanks to technological advances and increased global production of panels and turbines. Coupled with tax breaks and other incentives, big energy users are finding renewables to be competitive with, and often cheaper than, conventional sources of electricity.

GM is already saving $5 million a year worldwide and has committed to obtaining 100% of its power from clean sources by 2050.

U.S. companies are pursuing their own clean-energy agendas independent of Washington politics. Over the past four years, corporations have contracted for about 7 gigawatts of renewable energy – enough to power more than 1 million homes. That number is expected to rise to 60 GW by 2025, according to the Edison Foundation Institute for Electric Innovation, a utility-backed non-profit based in Washington D.C.

Such contracts are popularly known as power purchase agreements (PPAs), these are roughly 10-to-20-year contracts in which the owner of a large solar or wind project sells electricity to large customers, often at rates lower than those charged by utilities. These agreements allow energy users to buy renewables at attractive prices with no upfront investment.

These agreements also help companies avoid outages since RE companies often supply electricity straight to the grid rather than feeding it directly to corporate customers. This way companies enjoy the benefit of clean energy without cutting themselves off from the security of the grid.

Furniture retailer IKEA is a notable exception to the PPA trend, preferring to own the renewable-energy assets that serve its U.S. business, including rooftop solar systems on most of its buildings and two wind farms in Texas and Illinois.

In addition to above mentioned, the US companies that have made the commitment include Johnson & Johnson, Procter & Gamble Co and Nike Inc. Still, many big firms remain on the sidelines because they lack an overall corporate sustainability mandate, view renewables as having unattractive returns or because the contracts are too long, according to a 2016 PricewaterhouseCoopers survey.