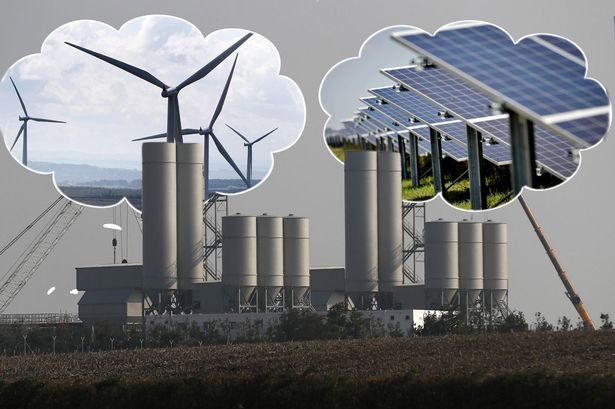 At the current level of renewable energy technology one may point to several show’-stoppers. However if i have to pick one it would be lack of “CONSTANT ALWAYS-ON POWER”.

A large part of demand remains constant 24/7, 365 days a year. This is the power that is used by factories and emergency services. They can not afford to loose power. Loss of power means shutdown which would cost in millions.

This demand is currently met by base load power plants. These plants produce CONSTANT output all year round. They however can’t regulate their output so they are optimized for their job to produce electricity in the cheapest way possible. At present only coal and nuclear plants can fit this job profile.

Moreover when the demand for power does vary during the day it does not follow the sun. It is often seen that solar production peaks at the off-peak hours. To meet this demand, we have variable output – load following power plants which are either natural gas or hydro based and in few countries we also have peak load power plants (these plants are turned on only for ~1h per day during the peaks, these are generally diesel generator based)

So always remember as of today whenever a wind turbine or solar panel is added, utility companies have to add a backup generator for that moment in time when solar/wind won’t be available.

Another important thing is “Grid Inertia”. Inertia is a property of the grid which limits frequency variations in case of sudden load or generation changes. High penetrations of renewable energy reduce the inherent inertia of the grid. The problem is that the grid was built for that old system — a few big, predictable sources of electricity. Renewable sources, on the other hand, are relatively unpredictable. They come and go on nature’s rhythms. And more than a bit of intermittent power can cause real problems for the grid—worst case, even a blackout.

Solutions are surfacing like use of massive banks of batteries overlain by sophisticated software and algorithms that work together to suck up excess renewable power when it isn’t needed, store it and push it back out again when it is needed, and switch back and forth almost instantaneously to help keep the grid stable and the lights on.

The world will need to develop a massive storage infrastructure for intermittent wind and solar electricity. There are lots of promising technologies.But right now we are far away from overcoming the shortcomings of renewable energy systems.