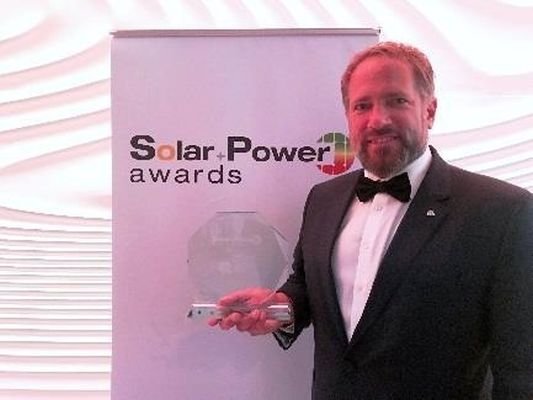 The REC Group, the leading vertically integrated solar energy company, has again been awarded the international Solar + Power awards. The awards were presented on September 26, 2017 in Amsterdam, The Netherlands, in conjunction with the 33rd European Photovoltaic Solar Energy Conference and Exhibition (EU PVSEC), the largest international conference for photovoltaic research, technologies and applications.

This is the second Solar + Power industry award for REC Group and the second time its innovative TwinPeak technology based on half-cut multicrystalline PERC cells has been awarded.

The ‘Silicon Module Award’ category recognizes achievements in delivering high quality products that establish, support or exceed industry standards. The jury remarks: “REC’s TwinPeak 2 exemplifies efforts to increase multicrystalline silicon efficiency to the point where it rivals that of monocrystalline PV products, all while reducing the number of modules needed to generate energy, or increase yields by utilizing a similar surface area.”

This year, over 4,800 industry professionals cast a total of 30,000 votes to award the winners across various categories that represent the entire value chain: from materials to end products, from process innovations to outstanding individuals working in the industry.

“We are extremely proud about this renewed distinction for our global leadership in multicrystalline technology,” says Steve O’Neil, CEO at REC Group. “The first generation 60- cell REC TwinPeak panel was already honored with the Intersolar Award for Photovoltaics panel shortly after it first arrived in the market. Since then, we have constantly set new standards for multicrystalline panels, resulting in the world’s most powerful 60 and 72-cell multicrystalline products.”

In 2010, REC Group received the precursor of the Solar + Power award (then known as “Solar Industry Award”) in the category “Module Manufacturing Innovation”. The award was a testament to REC’s pioneering vertically integrated and fully automated manufacturing facility in Singapore, opened in 2010. Based on these innovations, REC panels are today well known for their high quality and reliability with the lowest warranty claim rates in the industry.