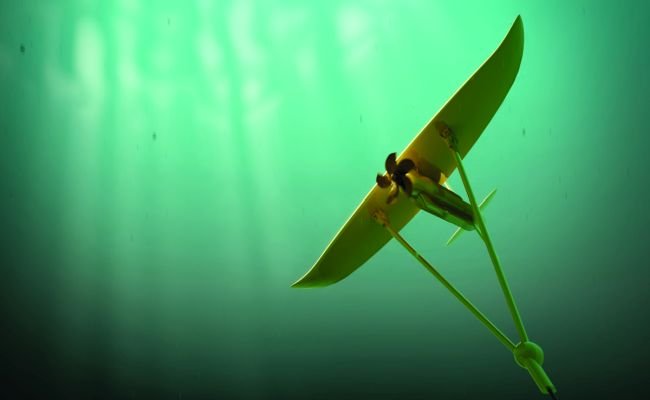 A completely new concept of underwater wave energy using a simple 7 ton kite turbine design has been developed by Minesto; which is a spinoff from the Swedish military and aircraft design firm Saab. The Deep Green underwater turbine captures the power of the ocean just like a kite in wind.

The system could generate 18 terawatthours of energy annually, enough to provide nearly 4 million British households with reliably green electricity every year. UK households now use about a third of what average US households use in energy.

Originally Saab was working on a kite design for a wind turbine, but found that the concept would actually work better in water, which is 832 times more dense than air.

The kite twirls in a repeating figure eight pattern that increases the ocean velocity ten-fold. The first stage increases the relative flow speed entering a turbine. When the tide hits the wing it turns down, which creates a lift force. The kite is mounted to the ocean bed with a tether and is controlled by a rudder to gently nudge it in the desired trajectory.

Each megawatt-worth of kite(s) would weigh 14 tons, so it would seem that each 7 ton kite is a 500 KW unit. According to CEO Anders Jansson’s estimate, these could probably produce power for somewhere between $0.09 cents and $0.20 cents per kwh.

Certainly because these are such extremely simple-tech structures they would be cost effective – costing less in materials per power produced, and costing less in transporting them to the site, in installing them and even in ongoing maintenance costs.

Almost half the potential in Europe is in British waters, with the ocean moving an average of 1 to 2 metres per second between 60 and 120 metres below the surface.

The Carbon Trust based in the UK gave early development support. Minesto’s Deep Green is now funded in part by the UK and Swedish governments, and has nearly $3 million in additional capital from parent company Saab Group, Midroc New Technology, Verdane Capital and Encubator.

With these kinds of serious investors, and such a simple and cost effective design, this could be what gets wave power to the world.

This is an unedited Agency news feed