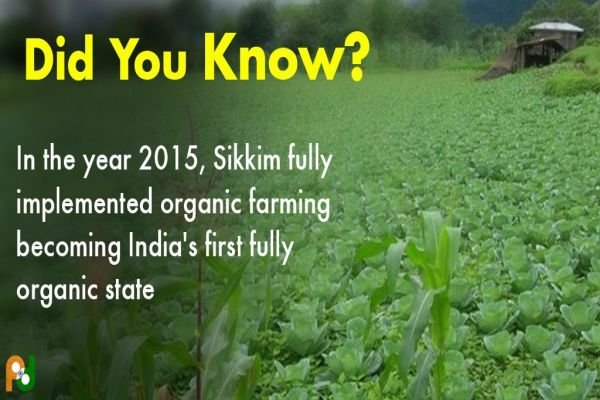 The second phase of organic movement will be launched to increase large scale production of various produces and create value for the producers by setting up a global supply chain by strengthening an export mechanism for the purpose, he said.

“It is now time to start the second phase of the organic movement in Sikkim in order to carry out large scale production, create value-addition to our organic produce, establish global supply chain and strengthen export mechanism.

“This, indeed, is a difficult task, but we are working hard at it. We need expert advice of the distinguished delegates in this regard”, Chamling said in his address at a conference, titled ‘The Organic Movement : The Way Forward’ here.

The chief minister exhorted the youth of Sikkim to come forward to make a token contribution for a better future of this world by engaging in organic farming as a ‘life saving’ profession so that a message goes across the world that organic way of life can undo damage done by consumption of chemical-laced food.

“We are doing everything possible to sustain our organic revolution and pass on the initiatives to next generation of farming community.

“We have to convince our educated youth to engage deeply in organic farming, which is a life saving profession, and every youth in the world must be made aware of its importance for the future world. We must also take into confidence political leaders from across different political organizations to join us in this noble mission” he said.

Chamling also highlighted a number of green initiatives taken by the state government for protection and conservation of the environment and said that the decision to convert the Himalayan state into an organic state was a natural progression of its commitment to environmental friendly development agenda.

The adverse effects of chemical fertilizers to soil, health and well-being of the people and environment had forced the state government to launch an organic movement in Sikkim way back in 2003, he said, adding that the state governmentÂ’s initiate had a ripple effect across India leading to organic farming gaining currency in other states.

Sikkim’s USP as organic state has received boost with the Prime Minister Narendra Modi lauding Sikkim on numerous times as a role model in organic farming across the nation on way to exhorting others states to take up organic farming, especially the Himalayan states of Himachal Pradesh, Uttarakhand and North Eastern States, Chamling, said.

This is unedited, unformatted feed from the PTI