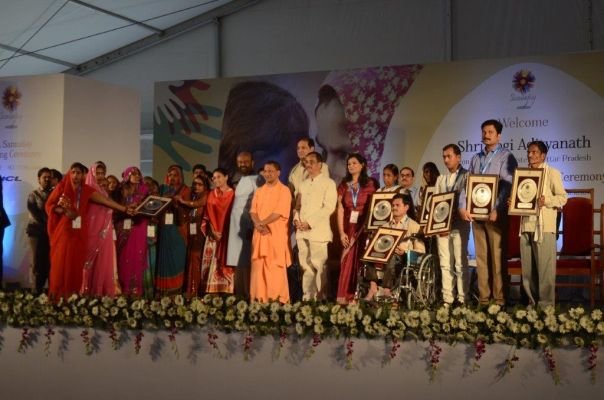 At an event of the HCL’s flagship programme ‘Samuday’, Uttar Pradesh Chief Minister Yogi Adityanath laid the foundation stone of a HCL’s 26.3 KW mini solar power plant at Malhpur and lauded the tech company for its social initiatives.

He also said that HCL would be investing Rs 1,500 crore in the state. The Chief Minister was welcomed by HCL Chairman Shiv Nadar who presented Adityanath with a ‘angavastram’.

HCL officials said that for the last 40 years, HCL has grown symbiotically with the community around, contributing towards the welfare of the whole ecosystem surrounding its centres of operations. In 2011, HCL had set up HCL Foundation as its corporate social responsibility arm with a vision of achieving inclusive community growth and development.

The Foundation is making long-term investments in the fields of education, health, livelihoods and environment and runs four flagship programmes – HCL Samuday, HCL Grant, Power of One and Urban Community Development with the aim of designing and implementing scalable and replicable models for social transformation.

HCL was born in Uttar Pradesh in 1976 and it continues to be the largest private employer in the state, offering direct employment to over 32,000 people across 16 offices. HCL Samuday was launched in UP in 2014.

“HCL Samuday is our initiative to develop a sustainable and replicable model – a source code for integrated economic and social development of rural areas. Currently implemented in three blocks of Hardoi district – Kachhauna, Behender and Kothawan, the programme covers 164 gram panchayats consisting 720 villages and 90,000 households, impacting over 580,000 people” a company official said.