e-Scooter From Vespa Due In Showrooms In 2018 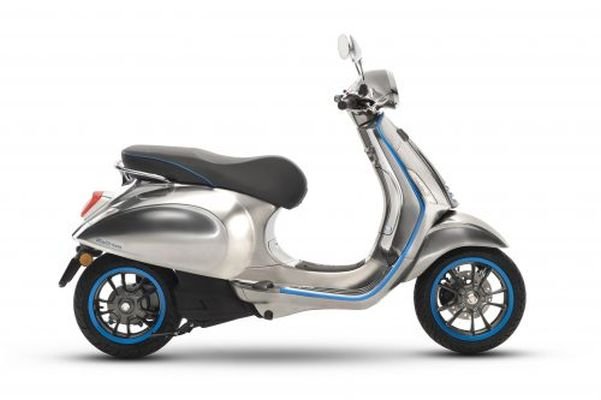 Vespa told us last year at this time that it was working on an electric scooter. This year, the company brought its electric offering — the Vespa Elettrica — to the Milan Motorcycle Show, where it revealed lots of details about its latest zero-emissions scooter except for the price. The Vespa Elettrica will be available sometime next year, but the company has not said exactly when.

Piaggio, the parent company of Vespa, told press that its electric scooter will have a range of 100 kilometers (~60 miles). It is not intended for long-distance commuting and so is  “perfect for city environments,” and it probably is exactly that.

Charging the battery takes 4 hours from a “normal wall outlet,” which in Italy is 220 volts. In North America, charging time would be longer. Piaggio says the battery is good for about 50,000 to 70,000 kilometers — equivalent to about 10 years of use. The battery is expected to have 80% capacity remaining after 1,000 charging cycles.

For those who are concerned about range, Vespa will sell a hybrid model with a gas-powered range extender that will boost range to about 200 kilometers (124 miles).

As befits an electric vehicle, the Vespa Elettrica will come complete with a 4.3 inch touchscreen that displays information such as speed, range remaining, and battery state of charge. A smartphone app will allow drivers to connect to the electric scooter via Bluetooth to access texts and incoming phone calls. The app will also have a map feature and make diagnostic information available to the driver. Vespa will offer a Bluetooth-enabled helmet with built-in microphone and speakers for hands-free communication during any journey.