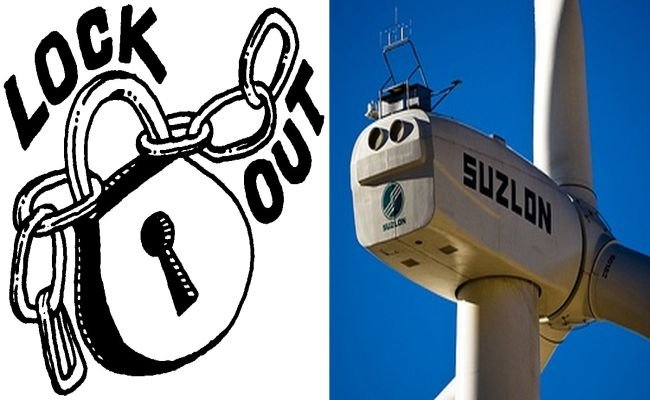 We did a story yesterday titled “Suzlon company locks out without notice in Udupi district, India”

Following the lockout at the rotor blade manufacturing unit of Suzlon Energy Ltd (SEL) located in the Special Economic Zone (SEZ) near Padubidri in Udupi district, the Deputy Commissioner of Udupi district has written to the SEZ Development Commissioner in Kochi seeking their intervention in the matter.

The unit had suspended its operations and announced a lockout in the early hours of Tuesday.

Priyanka Mary Francis, Udupi Deputy Commissioner, had held a meeting with the representatives of the company management and labour leaders on Tuesday.

The notice  which was placed at the company stated that over the last seven months, workers had indulged in ‘severe go-slow tactics’ resulting in production loss of more than 60 per cent.

During April-October 2017, the targeted production was 214 blade sets but only 76 blade sets were produced, it said.

Unruly action and behaviour of certain workers has caused hindrance in the smooth operation of the plant. After several attempts and exploring various peaceful solutions to resolve the matter, the company was constrained and compelled to give a notice to suspend the operations and declare a lockout, effective from November 29 at the rotor blade manufacturing unit to safeguard our people and the property.

Apart from Padubidri, the company has rotor blade manufacturing units spread across six other locations pan-India comprising around 2800 MW capacity.

Thus, the suspension of operations at the rotor blade manufacturing unit is not due to business compulsions but on account of industrial relations,” the company spokesperson said.