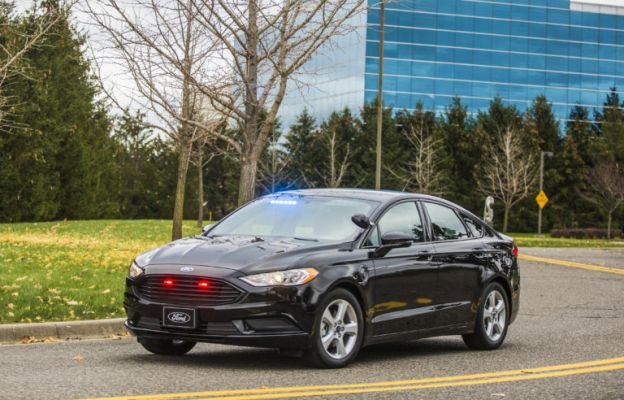 The new Ford plug-in hybrid electric vehicle (PHEV) is specifically designed for police and fire chiefs, as well as detectives and other non-pursuit law enforcement personnel.

Technically speaking, the new Ford will have a modest 7.6 kWh lithium-ion battery pack for up to 21 miles of range on electric mode. The speed limit on electric mode is 85 mph and Ford estimates the total range is north of 500 miles in full hybrid mode. Although the vehicle won’t break any performance records, it is a step in the right direction for these municipal fleets. It also includes a 3.3 kW onboard charger, giving it 2.5 hours to fully charge on a 240-volt, Level 2 charger.

The Special Service PHEV Sedan had to reinforce its top tray for the usual police-mounted equipment, with a metal console mounting plate, red and white task lighting in the overhead console, a police engine-idle feature, unique alloy wheels, and an auxiliary power distribution box in the trunk.

It also comes with options, such as a driver spot lamp, a trunk storage vault, a trunk ventilation system, and a rear door control-disabling feature. There is also a special dark-car feature that dims the interior lighting dash cluster 100% for surveillance purposes, as well as several emergency lighting packages.

The new Special Service PHEV Sedan is an addition on top of the Ford Police Responder Hybrid Sedan and the F-150 Police Responder. Both successfully completed rigorous testing by the Michigan State Police at Grattan Raceway in Belding, Michigan, and Los Angeles County Sheriff’s Department at Auto Club Speedway in Fontana, California.

Fleet owners will be able to order the Special Service PHEV Sedan this December with sales starting next summer.