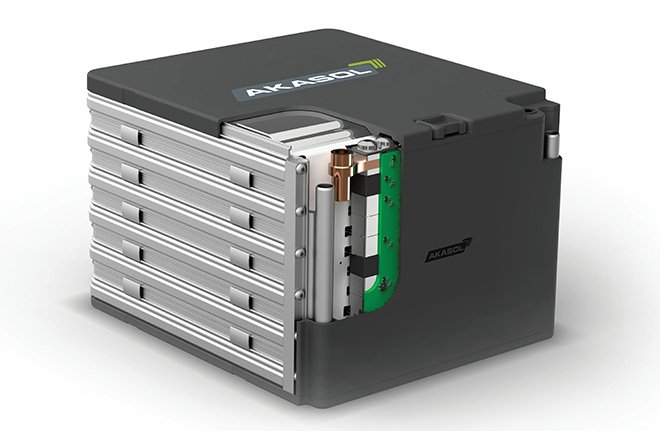 With capacity for 600 megawatt-hours of lithium-ion battery production a year, the facility, in central Germany, is the largest of its kind in Europe.

It is dedicated to producing Akasol’s Akasystem OEM lithium-manganese-cobalt-oxide battery product line, which ranges in energy storage capacity from 10 watts and 25 kilowatt-hours to 30 watts and 73.2 kilowatt-hours per unit.

The plant can produce high-performance battery systems for up to 3,000 hybrid or electric vehicles or other large commercial vehicles each year. The opening follows two contracts from unspecified “leading bus manufacturers” to build around 10,000 buses “within the next few years.

analysts were expecting Akasol’s primary market, for hybrid and electric buses, to grow by up to 35 percent a year.

Elsewhere, the company is targeting other commercial and industrial vehicle segments. In June, it unveiled a partnership with ZEM, a Norwegian company specializing in battery systems for maritime applications.

The two companies have launched a self-contained, modular 24 kilowatt-hour battery unit for small passenger ferries and aquaculture and fishing boats.

Akasol also has a stationary storage range, branded Neeo, which scales up from a 6.5 kilowatt-hour residential offering, priced at €8,499 (USD $10,075) with a 10-year guarantee, to a commercial and industrial product, with up to 650 kilowatt-hours of storage, to a utility-scale system.