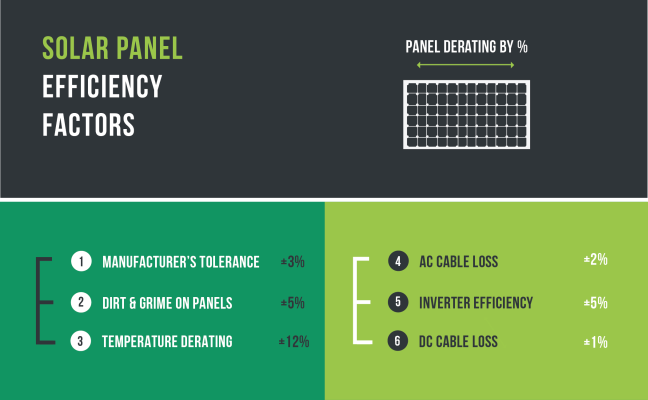 Inefficient? Really? Compared to what?

I have always felt that the premise of solar power efficiency was rather strict. It is based on using all of the sun’s energy and converting it into usable power.

Just think if we used the same measure of efficiency for internal combustion engines or for a coal-fired power plant, that would ridiculously knockdown the efficiency of both of them to fractional efficiencies.

I’m not sure why we have to limit the definition of solar power radiation to all of the radiation and not just the roughly 1/3rd of sunlight that is capable of being converted directly into electricity (the visible and near infrared, ignoring the longer “heat waves”).

If we use that paradigm, and restricted our definition of efficiency to how well we convert that band of sunlight, our present photovoltaic efficiencies would be about 70% and that sounds pretty awesome!!

Today solar panels are available at 15%-22% efficiency at reasonable prices. The fuel is free. And unlimited. So, you are capturing and converting 22% of a completely free resource.

Perhaps a coal or natural gas fired power plant is more efficient at converting fossil fuels to electricity. But, you have to pay for the fuel. And the environmental clean-up every-time someone spills something. And the long term impacts of pollution. And, the supply is not going to last forever.

We cannot harvest 100% of the sun’s light with photovoltaics, because of the laws of physics. The sun puts out a spectrum of radiation and not all of it is light, some is heat.

The maximum sunlight available to be captured by PV, just by the law of physics is about 33.7%

The 1961 Shockley-Queisser limit uncovered this fundamental fact of physics.

Physicists William Shockley and Hans Queisser at Shockley Semiconductor were the first to calculate the detailed balance limit: the maximum theoretical efficiency of a solar cell using a p-n junction to collect power from the cell. Their finding of this limit is widely considered the one of key contributions to understanding solar energy potential.

In effect, it says, that in ideal sunlit conditions about 1,000 watts of sunlight fall to earth per square meter, and of this, only up to about 33.7% can be utilized in photovoltaic solar.

The current commercial mono-crystalline cells are now about 22% efficient, because other constraints like reflections and the tiny shadows from the metal wires are further reducing the amount of sunlight accessing the solar cell.

It’s one thing we do MUCH better than nature.

Photosynthesis is about 2% efficient or less at converting solar energy to chemical energy in most plants. Sugarcane might get you up to 8% and we are doing a 22% conversion WOW…