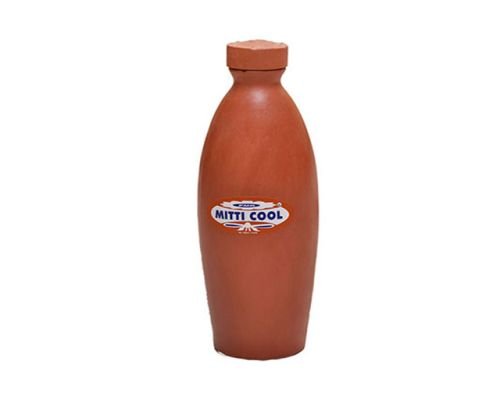 Not only do clay pots conduct heat but they also provide a distinct “earthy” taste. With this in mind, a company has found a new way to up the ante using clay pots in the name of a greener cause.

Due to India’s hot climate, especially during the summer, cooling products made of clay are nothing new to the locals. ‘Matki’, which is the Indian term for clay pots, were used since ancient times to preserve food and cool water. Matkas are made traditionally by combining two types of clay; the extra outer layer is needed for providing a protective layer to the pot. Matkis are shaped, polished, and dried before they are baked.

The MittiCool Bottle, has begun producing environmentally friendly water bottles made from mud, which are a version of the traditional water-cooling matkas that were exclusively made in India.

The MittiCool water bottles are self-cooling terracottas made from a special type of clay. Not only are they easy to clean and refill, but they also add a unique flavor to water. Water poured into Mitticool bottles will taste like deep-well water thanks to clay’s natural properties.

When the Mitticool bottles were launched by Mansukhbhai Prajapati, they received recognition from Prime Minister Narendra Modi. The bottles were in line with India’s initiative Make in India, which aims to encourage local and international manufacturing companies to produce their products in India.