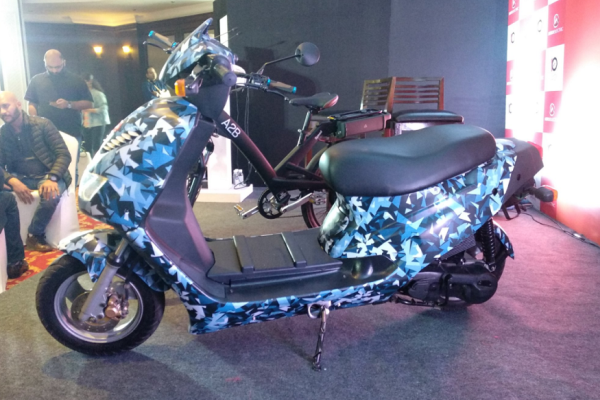 Hero Electric, a subsidiary of Hero Motors, launched a new electric scooter code named AXLHE-20. The scooter is perhaps the most powerful scooter currently being offered by the company.

The scooter houses a 4 kilowatt motor powered by a lithium-ion battery pack. The company claims a top speed of 85 kilometers per hour with a maximum range of 110 kilometers in one full charge. It would take four hours to fully charge the battery pack but with regenerative braking the pack can also be charged, to some extent, on the go. It can be easily charged at home overnight or at the office during the day.

Hero Electric also announced the launch of two electric bicycles along with the scooter.

The company is already the leader in the electric bikes market in India, commanding 65% of the marketshare. It has 15 electric bike models on offer, including two high-speed models before the launch of the latest one. The current offerings — Photon and E-Sprint — offer maximum speeds of up to 50 kilometers per hour with a maximum range of up to 70 kilometers on a single charge. So, the new offering is a big upgrade on the existing models