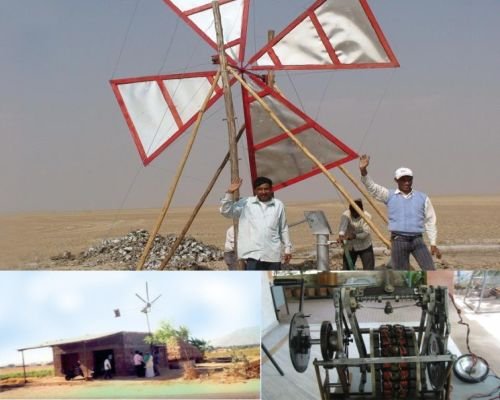 Sporadic power supply is a constant problem faced by people in rural and semi-urban areas in India.

Residing in Namakkal in rural Tamil Nadu, C. M. Subramanian also faced these problems so he thought of generating his own power and set out to build a indigenous wind power alternative. Since the wind speed in his home town was pretty fast, he decided to build his own low cost windmill.

Subramanian sourced materials from a local hardware store and started building a windmill. In the first stage, he fabricated the windmill turbine blades using thick MS steel sheets and connected it to a dynamo, which stored the energy in automobile batteries connected to an inverter.

Subramanian’s low cost windmill can produce power of around 0.8-1.2kVA, generating 80 volts @10-15Amps, when the wind speed ranges between 3-3.5m/s. This much power is sufficient for a household. The turbine blades can be controlled from the ground to stop the blades or reverse the direction of rotation. The windmill can be used either for household lighting and heating or to power a irrigation pump.

Subramanian has filed an Indian patent for his innovation

Dineshbhai Ashodia, a resident of Rajkot, Gujarat understood that a major problem for a wind-based power generator is the requirement of high critical wind speed to create mechanical energy so he used a governor that allows the windmill generator to reach criticality even in low speeds.

Nirma Institute of Technology in Ahmedabad has tested this unique machine. For this innovation, Dineshbhai has filed for a patent in the US.

The cost of commercial windmills is prohibitive for small farmers, Mohammad Mehtar Hussain and Mushtaq Ahmad, two brothers from Muslimghopa in Assam thought of replacing the costly equipment with indigenous material to bring down the cost of the windmill.

They developed an innovative wind-powered pump using indigenous material such as local bamboo, wood, strips of tyres, iron pieces and aluminum sheets. Initially, they innovated on this design to harness wind energy in areas of constant wind speed, which would move the handle of tube-well to pump water.

A sponsored project installed around 50 windmills in Amreli district in Gujarat for salt farming as well as for potable water fitted with a tube well. The National Innovation Foundation’s (NIF) Grassroots Innovation Augmentation Network did a lot of research and modification on the crude prototype to create these fine-tuned wind pumps.