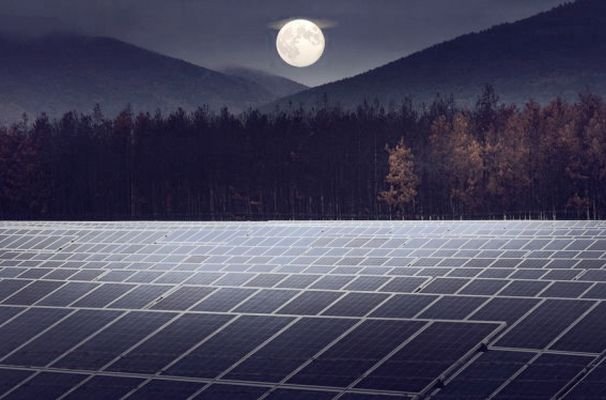 The answer is a definite YES, because Moonlight is nothing but reflected Sunlight.

Solar pv panels do convert moonlight to electricity. It can be used to power PV cells at  a cost of 345:1, meaning, a panel that would normally produce 3450 W at high noon would produce only 10 W of power during the full moon.

The quarter moon (50% illumination) would likewise produce only 5 W, and so forth. Concentrating moonlight using reflective or refractive techniques would enhance the wattage.

As long as the light has a wavelength within 400-1127 nm (violet to near-infrared), the PV cell will convert it to electricity. It doesn’t matter if it is sunlight, moonlight or flashlight.

With a full moon on a cloudless night, you get about 1/350,000 th as much as at full noon sun. So your 7,000 watt solar roof might output 20 milliwatts at full moon. Your inverter might cut out at such low powers, so you might get nothing from your system, but the solar panels are producing.

A solar panel that’s rated at 50 watts produced enough current to light up a red LED (I have tried it).

Looking at present technology, I would say that it is not possible to generate usable electricity from solar panel. Present solar panel needs energy of 1.1 eV (equal to band-gap of Silicon) to create electron-hole pair which moon light cannot provide due to less intensity(less energy).

If in future, we are able to replace Silicon with a material whose band-gap is equal to energy provided by moon light then solar panel(or I should say Lunar panel) can be used at night for electricity generation.This will also solve the problem of battery requirement for storage.

Climate Change Is Wreaking Havoc On The Colorado River Basin