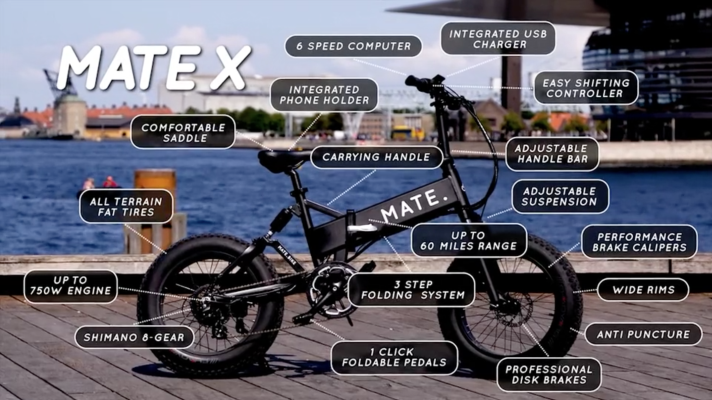 MATE Bikes made its debut on the world stage with an affordable folding electric bike. Their mission back then was to make an affordable, high-quality, well-designed e-bike that would make riding an electric bike an option for millions.

They are back for their second act on IndieGoGo with the MATE X, which brings a ton of upgrades to a lightly polished version of same successful platform that they originally brought to the world.

Their crowdfunding has already raised an impressive $11.7 million.

Crowdfunding is one of the ways they were able to make it affordable at such a low price.

The new MATE X does add a few subtle base upgrades that company believes will boost the experience for riders in meaningful ways, including a performance boost that translates to a voltage boost that has been “increased from 36V to 48V, which means you get a much more powerful bike with more torque.”

E-bikes enable bikers to ride for longer, faster, and even when they aren’t in shape. It’s a transformative experience that opens up the possibility of commuting and long-range biking to even more people. That lets people get in shape while getting the planet back in shape by cutting emissions at the same time.

Shipping has been one of the challenges for MATE, as the size of the LG or Samsung battery packs they use make all MATE eBike shipments “class 9 dangerous goods.” Not only that, but any container shipment containing a MATE e-bike is classified in its entirety as dangerous goods, which comes with its own set of increased rules and regulations.