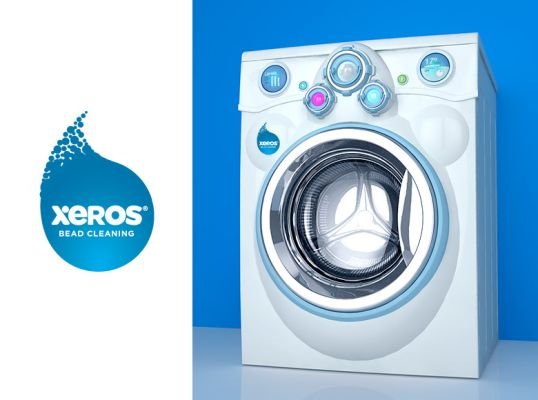 As water shortages become more common around the world, the laundry industry is under pressure to reduce consumption of this precious resource and generally minimize its environmental impact.

A new technology – polymer beads is in offering which is suppose to replace water – which would apparently reduce the amount of water laundry uses by up to 80%.

British tech firm Xeros had started selling these specially designed washing machines, under the name Hydrofinity, on the back of scientific research from the UK’s University of Leeds.

Nylon polymers “have an inherent polarity that attracts stains” and can replace most water in a laundry cycle, says Stephen Burkinshaw, chair of textile chemistry at the university.

After you put in your laundry, the drum adds about 23,000 small polymer spheres – which the company calls XOrbs – with a total weight around 6kg, plus a cup of water and detergent.

The spheres absorb the stains, then get collected through the drum, and afterwards are stored behind it to be reused next time.

The household machine uses 50% less water than a conventional washing machine, while the commercial version, which uses 70,000 spheres weighing 20kg, uses 80% less. A single industrial-sized 25kg machine running 14 cycles a day can save two million litres of water each year.

Xeros is currently working on licensing its technology to seven global washing machine makers and its machines are being adopted by hotels in dry countries such as the United Arab Emirates.