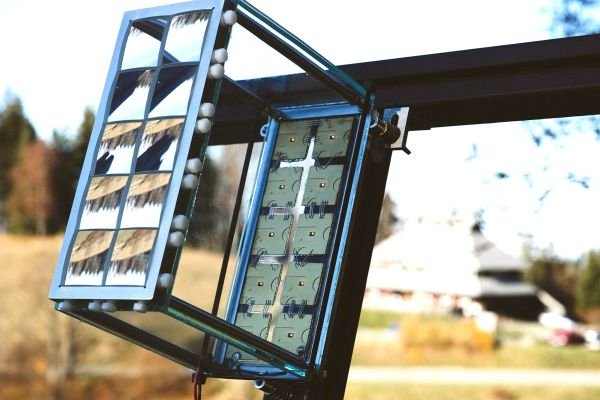 Concentrated solar power is showing promise in some large scale applications. It It uses lenses and curved mirrors to focus sunlight onto small, but highly efficient, multi-junction solar cells, according to Wikipedia.

In addition, Concentrated photovoltaics (CPV) systems often use solar trackers and a cooling system for even greater efficiency.

Last week a research consortium called CPVMatch, which is funded by EU and led by Fraunhofer Institute of Solar Energy Research, announced that its latest experimental CPV solar module has achieved an incredible solar conversion efficiency of 41.4%.

The secret to the new module is the use of achromatic lenses that focus incoming sunlight on miniaturized multi-junction solar cells. A two-axis solar tracker is also employed to boost efficiency during the day.

By using new materials, processes, and manufacturing equipment, they have created innovative cell architectures for multi-junction solar cells. In addition, they were able to improve the design of the high concentration modules by modifying the optics and making use of achromatic lenses.

CPVMatch has been working toward the goal of making CPV technology production-ready for the past 3½ years. It has merged the efforts of researchers in Germany, Italy, Spain, and France.

Now the hard work of moving the new technology out of the lab and into the real world will begin.