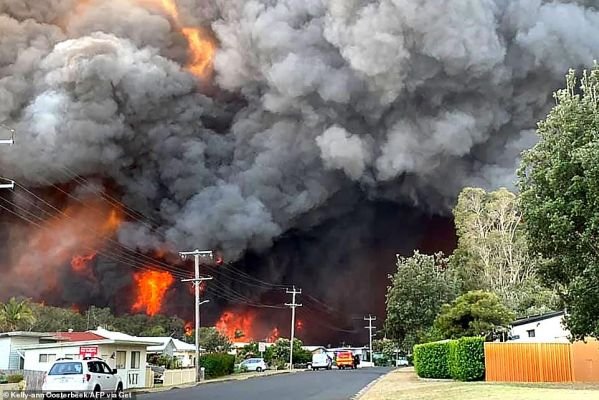 The wildfires currently ravaging Australia are so massive that they’re triggering widespread weather patterns and altering the environment around the world.

Orange haze over the North Island of New Zealand, monstrous fire clouds that vault into the atmosphere in New South Wales, and smoke snaking all the way to South America.

While the fires were often treated as a local story relevant only to Australians, their repercussions will likely impact millions of people in other countries and continents.

As thunderstorm-like plumes of smoke grow into the sky and clouds of pollutants make their way across the ocean, we all may be dealing with the aftermath for years to come.

One of the most striking weather phenomena are massive, explosive pyrocumulonimbus or “pyroCb” clouds.

These clouds are created by the heat and smoke from wildfires, forming towering chimney-like structures that have the same violent characteristics of a thunderstorm.

The clouds also drive other dangerous weather events like “ember attacks,” where burning twigs, branches, and other materials become airborne and rain down on the surrounding area.

Scientists estimate that wildfires around the world are responsible for about five to ten percent of total CO2 emissions annually. These toxic gases have a complicated relationship with global temperatures.

Some aerosols can have a temporary cooling effect by making the atmosphere more reflective and blocking sunlight, while other emissions, like black carbon, trap heat and lead to rises in atmospheric temperature.

Research shows wind can also carry smoke up to alpine regions like the Arctic, Alaska, and Greenland, where soot may accelerate the melting of ice sheets and glaciers.