Iconic Ambassador Car May Get An Electric Version 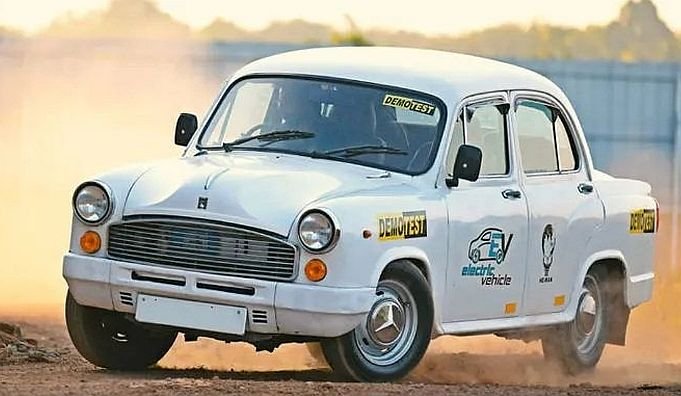 The popularity of electric vehicles is slowly and steadily increasing and same is true for India. The Government of India has also taken steps to ensure that electric cars will soon become popular with the masses, but affordability and lack of EV infrastructures play spoilsport.

Thankfully, some people are taking the initiative to build affordable and relatively-sustainable solutions, like the He-Man Group of Companies, a Kerala based private venture which has managed to build a conversion kit for Hindustan Ambassador.

While still in the prototype stage, the electric powertrain is capable of generating maximum power of 53 Bhp and a massive peak torque of 275 Nm.

The top speed of the Ambassador car is claimed to be 120 kmph, while accelerating from 0 to 60 kmph takes 12 seconds.

While performance isn’t that impressive still, the massive torque is useful in other ways.

The car is powerful enough to tow a Bharat Benz truck which weighs around 6.5 metric tons and has a payload of 8 metric tons, bringing the total weight to 14.5 metric tons or 14,500 kg. Extremely impressive to say the least!

He-Man Group decided to go with conventional Lead-Acid batteries instead of Lithium-ion batteries as it is much more affordable and also relatively more sustainable. The conversion kit uses a total of 22 batteries to form a 20kW source.

The driving range claimed by the company is 100 km, with a running cost of around only Re. 1 per kilometre. The cost of this prototype conversion kit was nearly Rs. 6 lakh, but the regular production kits will cost less.