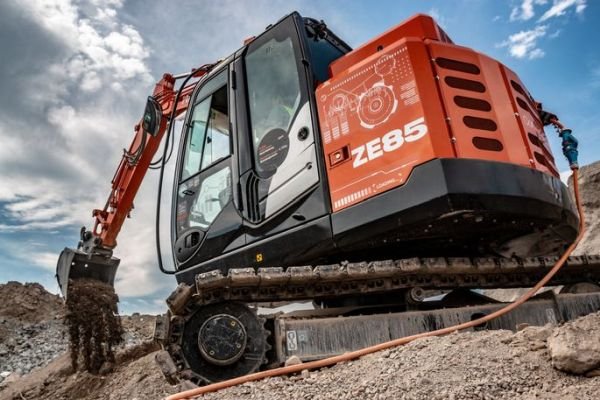 Oslo, Norway has enacted laws that say all new, public buildings must be built with “fossil-free” construction machinery. The jobsite you see below, features a ZE85 battery-powered electric excavator from Suncar HK, is just such a fossil-free site.

The ZE85 battery-powered electric excavator, which was presented last May at the world’s largest construction trade fair, bauma19 in Munich, is now being successfully operated on a zero-emission construction site in Norway.

It is the first electric excavator with an integrated CCS (Combined Charging System) fast-charging interface as it is known from electric cars. This enables full charging in under an hour.

The electric excavators can be operated both in battery and cable mode. They have an onboard charger and can be charged at a worksite distribution board via a standard CEE three-phase power socket.

The ZE85 excavator used in Oslo has a DC charging connection which reduces the charging time to three quarters of an hour.

What’s more, it’s believed to be the first zero emission, all-electric jobsite of its kind.

The European Commission is also setting the trend, issuing guidelines in the areas of “Buying green” and “Green Public Procurement” and regulating emissions on construction sites. As a result, clean technologies such as battery-powered construction machinery are also finding their way into the construction industry.

Those laws explain why so many heavy equipment companies — including Liebherr, CASE, and Volvo CE — are spending heavily on R&D to electrify their lineup.