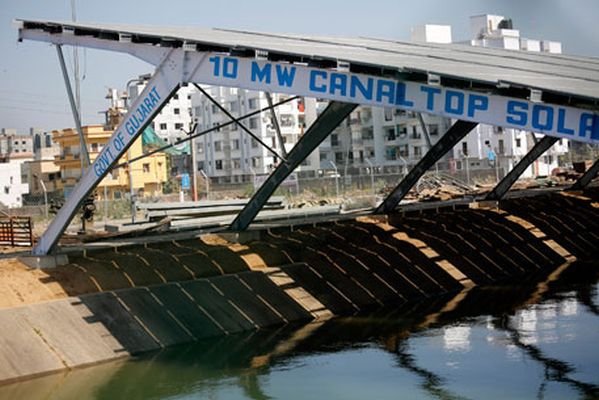 India’s solar capacity reached 36.6GW in 2020, with the aim of growing it to 100GW by 2022 the Indian Government is looking at solar canals as an option.

Since one of the main challenges in building solar farms is finding the right place to do it. Land is relatively expensive in India and often has multiple owners, so the purchase of land involves many formalities.

Rooftop solar panels are one solution, but sunny space atop buildings is limited too.

The state of Gujarat is addressing this challenge by covering its canals with solar panels, a solution that saves land, water and carbon emissions in one go.

In these solar canals, the panels are suspended on a metal structure over the canal, with benefits for both water conservation below and cooling of the panels above.

The energy generated from the solar canal can provide electricity for farmers during the energy-intensive irrigation season, and out of season the electricity can be fed into the state grid, sold to distribution companies or used by the canal authority.

As this power is generated in a rural area, the transmission losses are reduced and the local grid is strengthened.

Since the first solar canal project, a number of others have been commissioned in India, including a 100MW canal-top solar power project atop the branch canals off the Narmada River, stretching for a distance of 40km, at an estimated cost of 1bn Indian rupees ($13.9m/£9.3m).

Overall, Gujarat has more than 80,000km of canals meandering through the state. According to Gujarat State Electricity Corporation, if 30% of these were converted to solar, 18,000MW of power could be produced, saving 90,000 acres of land.

In states like Gujarat, Rajasthan and Maharashtra, where canals are mainly used for irrigation, evaporation is a big problem. This solution not only restricts evaporation but it also curbs algal blooms in the canals. Algae growth can clog water pumps and cause toxicity.

This innovative projects can provide cheap and consistent electricity to millions of farmers and improve their profits. So far, eight Indian states have commissioned canal solar projects.