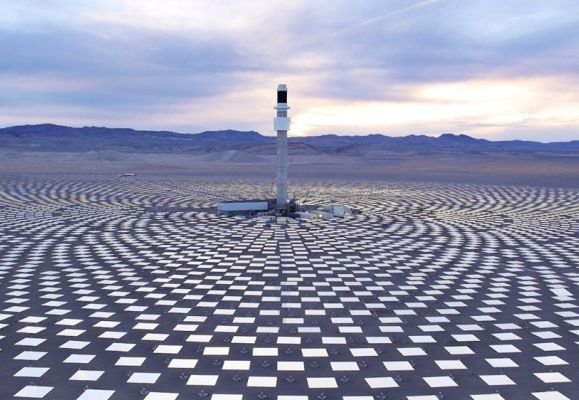 Concentrating solar power (CSP) may have finally found its one true love: supercritical carbon dioxide, aka sCO2, which is something that happens when carbon dioxide gas behaves like a liquid.

The electricity generation field is all aflutter with the idea that sCO2 can ramp up power plant efficiency while cutting costs, and concentrating solar power could be just the ticket.

For those of you new to the topic, it involves collecting solar energy from fields of mirrors called heliostats, or from long troughs, and using it to heat a specialized oil or molten salt, which can then be used to generate electricity in a power station.

Concentrating solar power initially got a bad rap due to its relatively high cost, but the trade-off is something that renewable energy fans dream about: the ability to replace conventional power plants with 24/7 clean electricity.

The heated oil, salt, or such acts as built-in energy storage, enabling the plant to continue generating electricity at night.

Demand for oil and gas is set for a long, hard fall, meaning that the extraction market for CSP is going to dry up, eventually.

If and when it does, the US Energy Department is already eyeballing the industrial market, as concentrating solar can produce the high heat needed in many processes that currently rely on fossil fuels.

With its superior efficiency and the potential for lower costs, sCO2 could help make concentrating solar power more competitive in the sparkling green economy of the future.