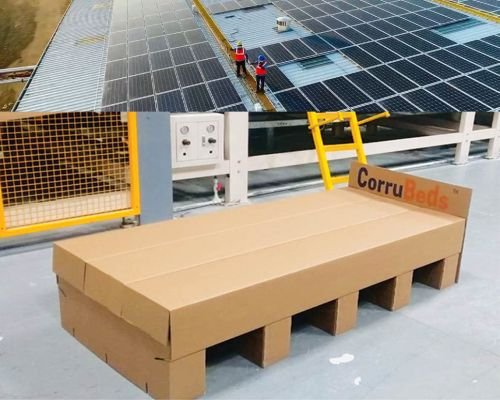 Khetan Corru Case (also known as CorruCase), the Mumbai-based corrugated box manufacturer has gone an extra mile this time to be named as one of the top corrugated facilities in India to run on harvested solar power.

CorruCase claims that its facility in Hyderabad now runs on 80% renewable energy harvested from its captive solar plant, which was inaugurated in October last year and installed by a sister concern of the firm – Solar Anchal.

This is not a small feat. The phase from conceptualization to implementation took nearly four years for the CorruCase, which is reaping benefits from the project in terms of sustainability and reduction in carbon footprint.

According to Ayush Khetan, managing director at Khetan CorruCase, the captive solar rooftop plant, along with other sustainability measures, has helped the company in achieving over 40% carbon neutrality in just over three years.

The choice of solar was done after a complete analysis and exploring other options it was found that solar energy is one of the most easy-to-install options and can be set up on existing infrastructure.

Another reason was the considerable reduction in the cost of procurement in comparison to other renewable sources, thanks to the global efforts to move towards clean energy.

Aligned to their customer’s global sustainable goals, they are working towards achieving 100% carbon neutrality in their process in next 10 years.