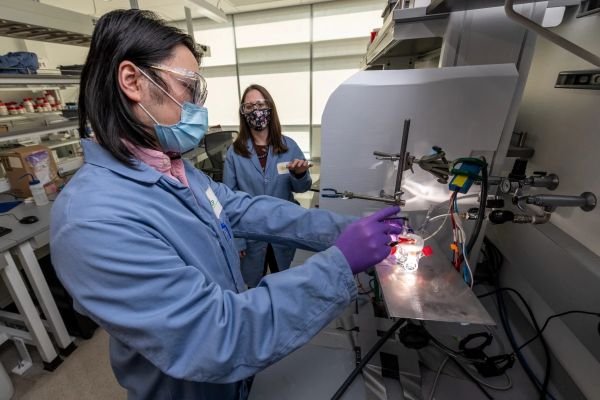 Scientists have uncovered a surprising, self-improving property in the artificial photosynthesis device made of silicon and gallium nitride (Si/GaN) that contributes to the material’s highly efficient and stable performance in converting light and water into carbon-free hydrogen.

Materials in solar fuels systems usually degrade, become less stable, and as a result produce hydrogen less efficiently, but the team found an unusual property in Si/GaN that somehow enables it to become more efficient and stable.

These two are abundant and cheap materials that are widely used as semiconductors in everyday electronics such as LEDs (light-emitting diodes) and solar cells.

Zetian Mi, a professor of electrical and computer engineering at the University of Michigan who invented Si/GaN artificial photosynthesis devices a decade ago turned to senior author and Berkeley Lab scientist Francesca Toma for better understanding the process due to which Si/GaN device achieved a record-breaking 3 percent solar-to-hydrogen efficiency.

Toma and lead author Guosong Zeng, a postdoctoral scholar in Berkeley Lab’s Chemical Sciences Division, suspected that GaN might be playing a role in the device’s unusual potential for hydrogen production efficiency and stability.

They carried out a photoconductive atomic force microscopy experiment and observed 2-3 orders of magnitude improvement in the material’s photocurrent coming from tiny facets along the “sidewall” of the GaN grain.

The material also had increased its efficiency over time, even though the overall surface of the material didn’t change that much.

A tightly integrated theory-experiments collaboration enabled by the HydroGEN consortium – will be used to further improve the renewable hydrogen production technologies.